Takki appeared in the CM for “Nicchin”, a range of Microwavable noodles/pastas from NISSIN (including Spa Ou). The campaign and official website is launched on 26 Sep 2008, which is also the O/A date of the CM. In this CM, Takki acts as a Chef :) 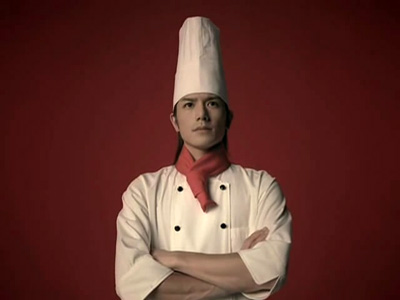 “NICCHIN” CM
» 30s version | HQ
The 30s version has Takki standing in front of a oven fire, followed by a close up of his side profile, the range of products, a front view close up *kakkoii*, and finally he stands really still for a few seconds, arms folded. Just when I was wondering what’s wrong with my video… he tilted his head and went “….un?” *LOL* That’s the only word he said, but it’s so cute and funny!
» 15s version
The 15s version has a different “…eh?”!! LOLOL~ and the fire part at the start is not included in this version.