The official Takara Can Chu-Hi site has been updated with a video of the CM Making, and 2 sizes of Wallpapers for download.

About the Making (translation by bon):

When filming the lemon-squeezing scene, in order to capture the strength/intensity (shown in that scene), there was a loud explosion of sound from the wind that was blasted towards Takizawa-san. Within the 5 story building, even though (the wind machine?) it was set to level 3, the sound was still really loud. Worried, the director thought “I wonder if it will work out?” In the test round prior to the shoot, even Takizawa-san was surprised and laughingly said “Ohh~! This gave me a shock ne! Wow!”

“This is difficult, isn’t it,” he said as he consulted with the director as to how to carry out that image/scene.

But despite this, when it came time for the real shoot, Takizawa-san ignored the “Level 5” sound and shot a wonderful scene in just one take – showing the professional side of him. When the director asked “Do you drink sake?” he said “I love Chu-hai.” When the director jokingly replied “I dont drink though…” he smiled and said “Isn’t that bad?!!!”

I’ve grabbed the videos from the site. Douzo~ 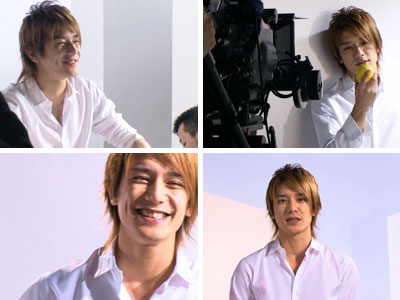