I made it back in time for this! And the connection was quite smooth :)

It seems like Takki really did have his hair coloured at the salon earlier today. It still looks dark, but not as black as in Utaban? Or are my eyes playing tricks on me? hehe~ But whatever the hair color, Takki looks CHOU KAKKOII!!!!!! I love that white shirt!! (and that necklace again!!! It’s on my header image too desho!) I think he wore that shirt before during X~Dame promo? Or something similar to that~ but I love the black strip in the middle, where the buttons are. I thought the grey vest fit it really well! Tono looks really good today!!

As they counted down to the show, the female host talked to T&T, about travelling overseas etc etc. Then the camera introduced all the guests for the day. All of them pointed to each other lol~ and when it finally came to T&T, Takki at first looked serious, then suddenly, he also started pointing to Tsubasa lol 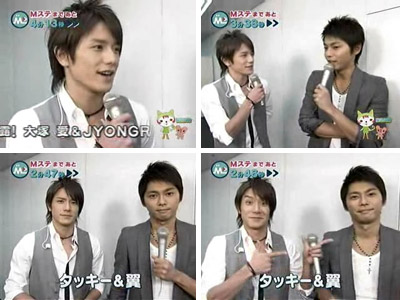 Super short clip! But I love seeing the boys walking down the steps lol. And they were introduced for a short while after Otsuka Ai. Tono looked so cute in the bottom 2 screenies ^^ 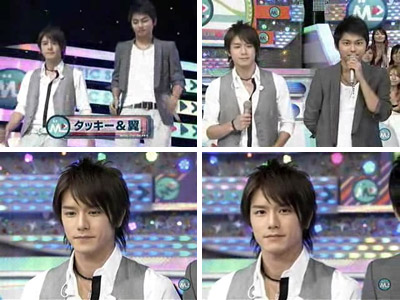 “Koi Uta” is #2 today, sigh~ just when they appear on Music Station, it dropped to #2. And it’s only the 3rd day :( ‘m chotto worried about the weekly figure ne~ it HAS to do better than Samurai!! ahhh~~ *chucks that aside for now*~ Anyway, during the short talk segment, Takki said he fell in love for the first time during first year of Junior High. I was looking at his unbuttoned shirt again *lol* After a while only, they were told to standby and went off to the stage for Koi Uta. 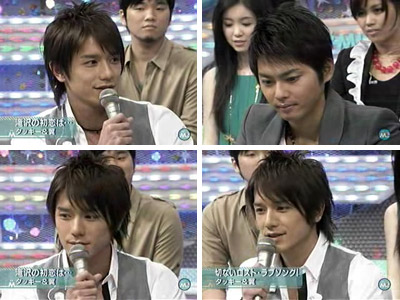 The singing for “Koi Uta” is better this time, compared to the other two performances. I hope it’s not true that Takki has caught a cold recently ne… definitely not a good time to fall sick… 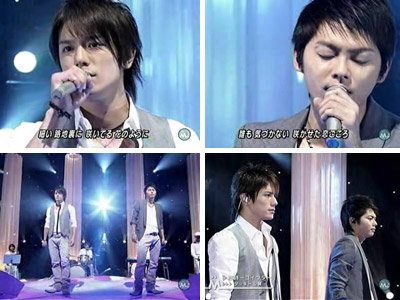