Takki appeared as a guest of a “hostess club”. The hostesses are all males in disguise of coz… They asked Takki if he’s been to a hostess club, and he said “yes”! lol~ Then one of them asked Takki if it’s ok for Johnnys (to be in one, or to say that he’s been in one lol~), and Takki said, probably not. LOL… 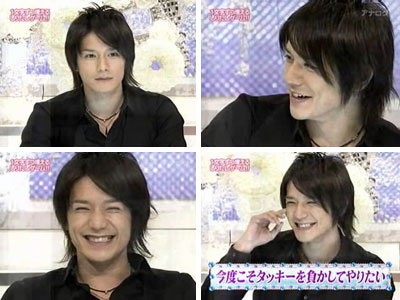 Then, they started playing some word game. They had to form a word starting with the previous person’s last hiragana letter, and the no. of letters per word will be increased with each person. The person who’s unable to form a word loses the round and he’ll have to down a glass of water.

After every round, Takki did some promotion! LOL! It was so funny how he took out the Kakumei DVD — first the regular edition, then the limited edition, and tried to promote it…. and when they tried to stop him for the 3rd round, he took out a leaflet for Takizawa Kabuki hahahaha~~ 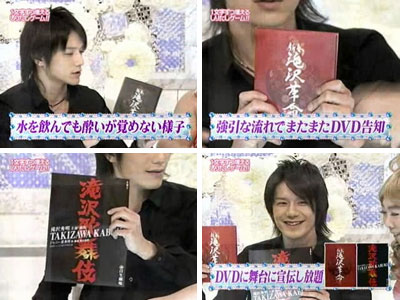 Finally, they made him change seats with the one on his left, coz he’s not losing at all lol. And indeed, after changing seats, Takki had to say a ‘5-letter word’ starting with “Ra”… and he lost haha! The way he counted the letters with his fingers was so cute!! And then he tried to promote Takizawa Kabuki again when everyone was in a state of confusion lol~ but got stopped. The leaflet was hit out of his hand…

Takki was made to drink the glass of water. He looks cute even when he’s drinking water lol. But after that, they wanted him to do the lambada (brazilian dance) hahahaha… coz the word he tried to say was “lambada” (ra-n-ba-da… which has only 4-letters lol~) so he stood up and did a few moves only, coz he couldn’t stop laughing XD 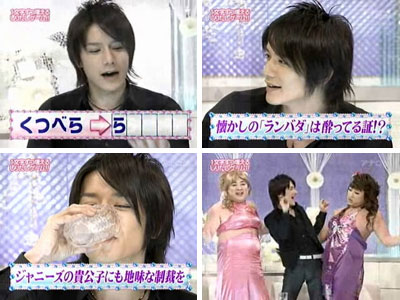