The talk segment was so cute~~ Takki smiled and laughed so much in this episode!!!! THEY KEPT MAKING FUN OF HIS MANBRA!!! *ROFL* And right at the start of the show, Takki kamikami-ed!! *LOL* (So funny when Tsubasa raised his hand and smacked Takki’s head!)

Then, it was the “T&T News” segment. First, Takki – in women’s clothes. They talked about the incident where Takki was practicing makeup (for Enbujo) in his room while his mom came in, got a shock, and screamed LOL! And Downtown asked him if he wore a bra during that time *ROFL* Takki was like “I was practicing make up! MAKE UP!” LOL! They also asked him about cleavage? Bwahahaha… Then they showed some of the Kabuki segment (mainly the costume changes, and the last scene from oshichi~) from Enbujo’08!! 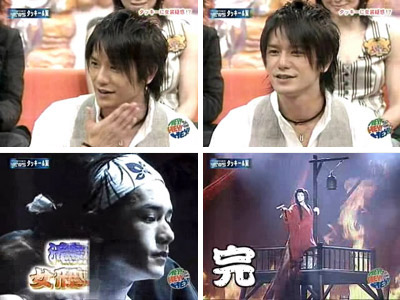 And there was Murakami Shingo (Hina) and the Totoro Clock! LOL! Takki got for Murakami a Totoro clock for his bday, and asked jokingly for him to bring the present along to watch Enbujo (this was in Winkup magazine). And Murakami really brought that clock to watch Enbujo. In the dressing room after that, he gave Takki a bday present, and it turned out to be the same Totoro clock! So now they have a pair! hahaha~ There was a VTR from Murakami too lol.

Then they showed a pic of Takki in black (shirt zipped up to the top lol) pointing to the Totoro clock on his home wall. Then Tsubasa talked about the present that he gave Takki, a pro-wrestling mask. And they showed another photo of Takki in the same pose (pointing to the Totoro clock), but this time he’s wearing the pro-wrestling mask!! HAHAHA!!! Then, Downtown asked again if Takki wore a bra then? LOLOL~~ Takki’s bemused face was sooooo cute!!!! 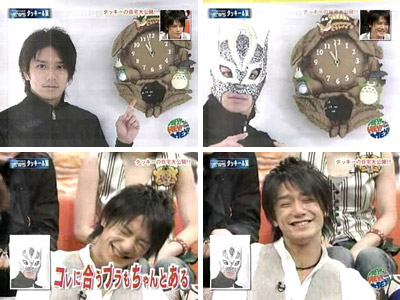 Then Tsubasa pulled him away, to get ready for the song LOL, while Takki was protesting about the bra thing :)

Well, the best part of this program is definitely the talk segment! I was smiling non-stop while watching! kekekeke~~ If there weren’t any song performance, I wouldn’t mind at all lol =P Yappari, I still prefer Tono acting :D

Later on, during the other guest’s segment, suddenly the BRA thing was mentioned again lol. But I’m too tired to re-watch to find out what was it about lol. Gomen… So drained today, having slept only 4 hours this morning, worked till 6pm, rushed home to catch Hey!x3 @7pm, went over to Irene’s house to get my KOI UTA singles, and now just finished posting about it *phew* My eyes are hurting T_T so please forgive me if any of my translations above are wrong…

Lemme go for a quick bath to freshen up, then I’ll open up my singles!!!