We arranged to meet at the station in the morning, and got some パン so that we could eat on the train. We were supposed to alight at Yamada station. Funniest thing was: When we already REACHED Yamada station, NONE OF US got off the train! ^^ Instead, the 3 of them started talking about Yamadataro Monogatari lol~~~ until the train moved off, and I saw the signboard “Yamada” moving away from us… then it hit us!! LOLOLOL~

Fortunately, it’s also possible to alight at the next station. From there, we took a pic of the map at the station and set out to find the first “target” of our “Takki Pilgrimage” :D

Along the way, there was a white lorry with a recorded message playing from the loudspeaker. It was a recycle-company’s lorry and straightaway we thought of ロミオ lol~ We bakas took a few pictures of that lorry, and even joked about photoshopping Hiromichi’s face onto it (and changing the colour of the lorry from white to blue~) ^^’; 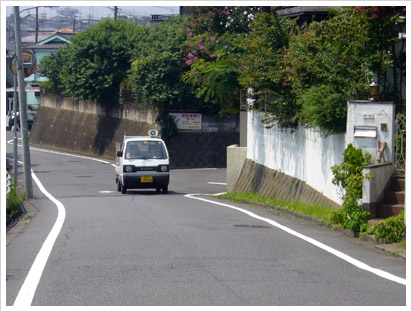 After navigating through many private houses, we found it — Takki’s nursery school!!! We were amused by a cheeky boy who got out of a taxi, and climbed over the school’s gate instead of opening the door~ his mom was yelling at him from inside the taxi. 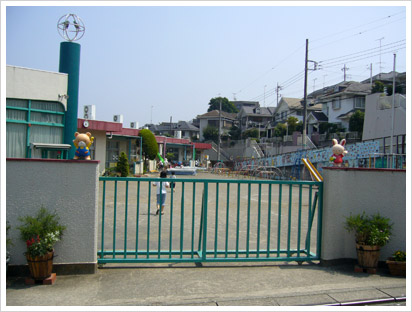 Then the next stop was the difficult one. Finding his old apartment and primary school… We aimed to get back to Yamada eki using the map. But it was such a hot day, and only Snuffles had an umbrella~ We were practically baking in the sun! I downed a bottle of Calpis from a vending machine just outside a playground & baseball practice area, which I think Takki often went to when he was young? Not sure, but we took pics of them anyway~ :D 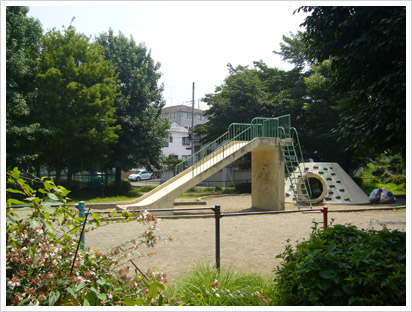 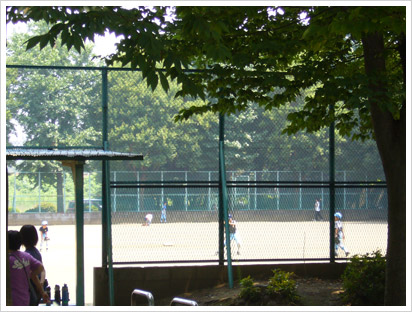 And we reached Yamada station finally, after stopping over at a 7-11 (and I downed another bottle of AQUA i think). We ended up thinking we did not find his old apartment… UNTIL I went back home (in Singapore) and flipped the info book to confirm~ then I realised that I probably DID take a picture of his old apartment, unknowingly of coz :D 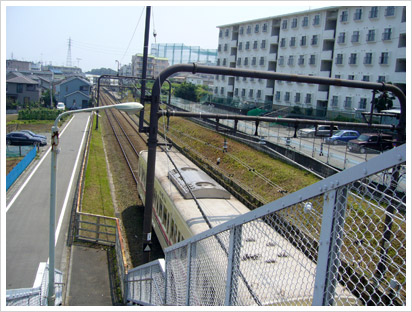 The route to his primary school was the hardest — physically! Under the scorching hot sun, we walked… I started to get roasted and even my feet had my sandals “g-string” mark on it~ Loracyn’s watch mark on her wrist was obvious too lol~ and oh yes, there’s Ribi’s polkadot-plaster mark lol~

So, question time: what did I go through to find Takki’s primary school?

1) Walking under the scorching hot sun around noon time (the hottest!)
2) A field of crops with fertilizer on it
3) 2 cows eating grass on a pile of cow dung!
4) Walking down a slope with heels!
5) 30/40+ more cows!
6) More baking in the hot sun with no uchiwa, no umbrella, no handkerchief…
7) All of the above

We walked through a field of crops (that wasn’t plotted on the map lol~ we figured this might be the “bushes” that was mentioned in the infobook? LOL~) and it was already starting to stink a bit from the fertilizer. Then we reached the top of a ‘slope’ thingie among some bushes (it’s not that hot there though as it was covered with trees~), and found 2 cows on a huge pile of their own waste! Imagine the smell already! Fascinated by that (we bakas never seen cows that close up before apparently~~) we took pictures of those cows… 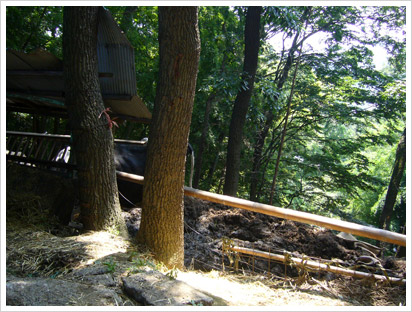 Look at that amount of dung!

Walking down the rather steep uneven slope with heels was quite scary! (this picture below is only the top of the slope~ the bottom part of it was more rocky and steeper ^^) 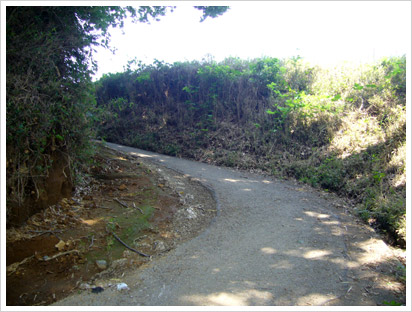 But what greeted us at the bottom of the slope was…

A COW FARM! bwahahahaha… I remember we just started laughing! We weren’t even sure if we were walking in the right direction, and of all things, we found cows!! lol~~~ There were about 30-40 of them in the farm? And I was suffocating from the SMELL! *sweatdrop* But still took pictures of it *baka* haha… 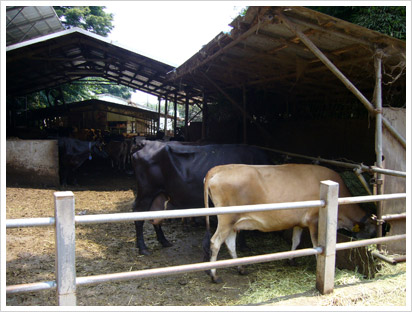 After this cow farm, as Snuffles put it, we finally found civilization again! We were wondering if Takki had to walk past cows (and smell THAT) to school every day~~ ^^ Then after walking awhile more, we found a temple – an indication that our target was near — and then, more signs to tell us we’re in the right direction: 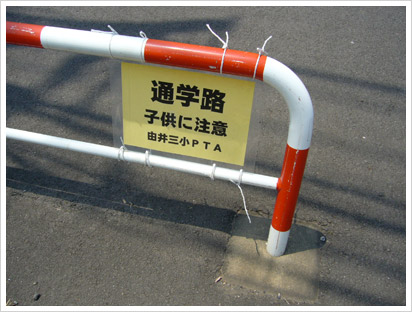 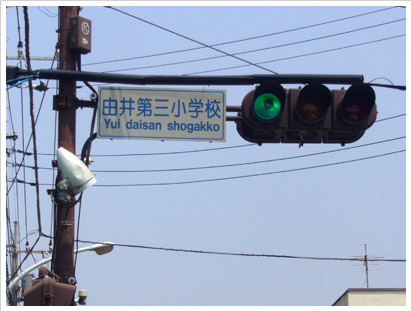 Snuffles and I walked in front, and spotted the school’s rooftop sign from far!! But none of us took any pictures of it… After walking a while more, we finally found the school!!! But since it was the summer holidays, the school was closed, so we made do with taking pictures from outside :D 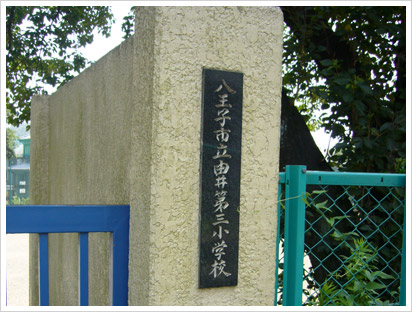 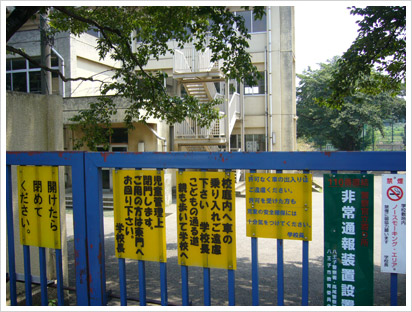 Unable to bear the heat any longer, we decided to take a bus to Hachioji station. There, I bought a black umbrella (which I left behind on the train the next day v_v;), and SLIPPERS too — as I won’t be able to take walking with heels in the heat any longer. We got our Look@Stars, Top Stages & FineBoys there as well.

Then headed for our next destination: 100 Yen Ramen Shop @ Nishi-Hachioji! 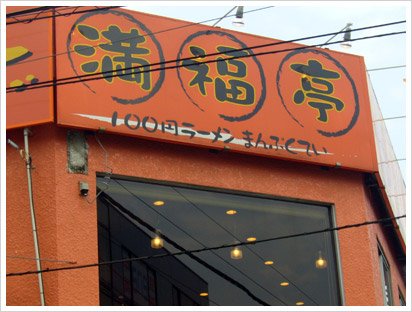 This was quite easy to find, although we were wondering if we got the correct shop, since there was no picture of Takki at all, and erm, there wasn’t even a first floor now! We found out that the shop was renovated about a month ago, everything looks so new and clean. And I really love this shop. The food was nice too, and the serving was just right for me. Even the plain Shio Ramen (the 100 Yen one, with just onion toppings?) was oishii~ ^^ I added a golden egg, so mine costs 200 Yen. Ice water was free :D 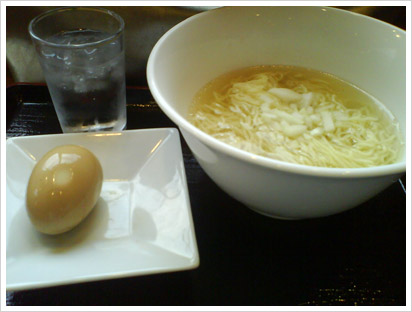 Then, the next destination was far away, although still in Hachioji. We had to take the Keio line, and finally reached that station. With the not-so-accurate map I had, we set out to find the house that Kyon Papa built.

Before I proceed, this is a refresher, scenes from Boku dake no Madonna: 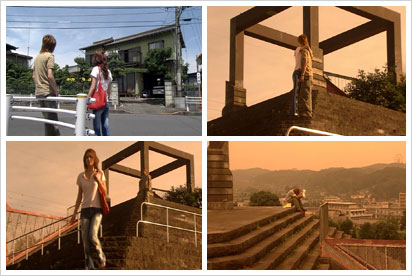 Ok, this part was quite stupid coz we got the wrong Kyon Papa house LOL! At first I thought that what we found looked like it. Then later – while we also noticed that most of the houses look alike – I saw a green house a distance away and suddenly remembered…. I told the girls that I think Kyon Papa’s house is green!! I thought of taking a look at that green house, but they said that they remembered it was brown… Ahh… 3 vs 1, so I thought I remembered wrongly na…

In the end, we didn’t go over to that green house. Along the way back, I dunno if it’s a Scorpio thing or not, but I just have this feeling that I was right. After returning home (to Singapore), the first thing I did was to put in my disc and watch lol~ True enough, it was green, and I almost stabbed myself on the spot! Lol~ I should have brought along a screencap, stupid me! But then again, that show was made 4 years ago, the owner might have repainted the house? hehehe~ ^^

Anyway, that aside, the best thing that day was…

We found the park where Kyon & Surumi hugged, that Kyon read the letter and cried~ It was kinda the happiest moment for me that day coz it’s like… ever since I found out that this park was in Hachioji… well, at first I thought it wasn’t possible… but after googling out the exact location of this place, and wiki-ing out how to get there, after all the sakusen-ing (same goes for his nursery school, primary school, and apartment), if the map lied to me, I think I would have cried lol~ 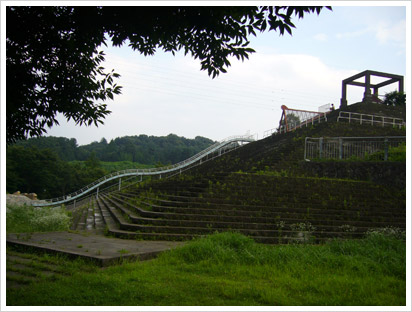 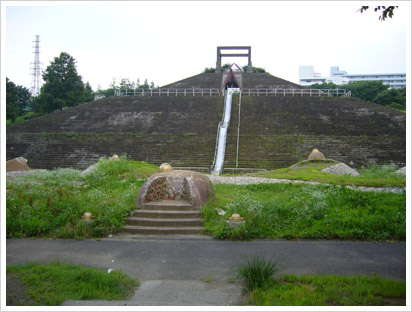 None of us dared to run down the metal slide like Kyon coz it looks slippery and was quite steep! And we were wondering why there were so many weeds growing out of the steps~ We played on the swings, took pics of the sand pit, of the place in all directions and angles lol~ and watched the train go past. From the top of the steps, we could see the “GO!” ferris wheel too ^^ 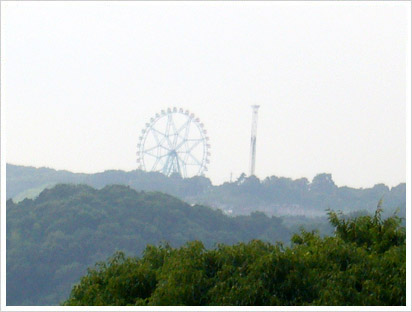 Oh yes, I remember Ribi battling a centipede as well LOL… After a while, we decided to head for the summer festival so after washing our legs and arms, we walked back to the station… 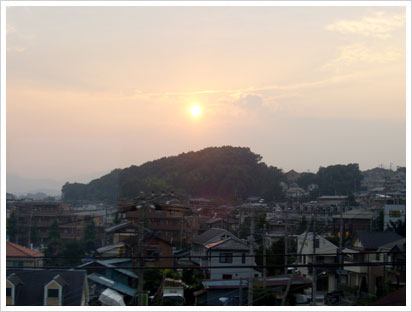 Summer festival in Hachioji~ It was really a good experience ne, we didn’t have to use the map to get there~ just had to follow the crowd! Many girls were in yukatas, clogs and uchiwas~ :) The uchiwas were like life-savers in the hot sun lol… I remember the fireworks were from about 6.30pm all the way till 9pm. We were comparing them to the NDP’s chicchai 10-min fireworks lol~ Sugoi na~ We watched from even before the sky turned dark, till it was totally dark. We took loads of videos! :) 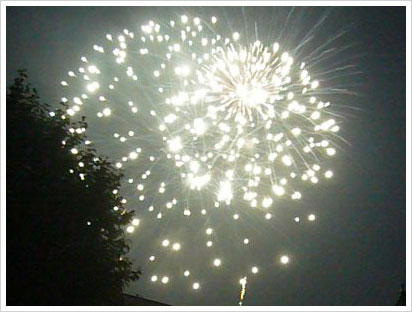 Then we set out to find that other Ramen shop that Takki went to, for our dinner. Finally found it after asking around for directions, and the ramen was good, but I was too full to finish it. It was ramen the entire day lol! This one was more expensive, 800 yen~ There was a picture of Takki (from a Myojo magazine) (inset) pasted up on the wall. The people in the shop were quite friendly too~ :) 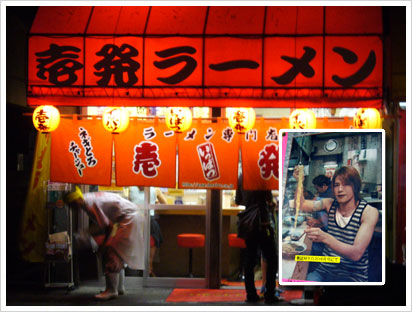 After the meal, it was already quite late. We had to head back or we’d miss the last train. Fortunately, a lady gave us directions to the station, which was quite a long walk… but it was NOTHING compared to what we went through during the day :D

Sou, this was my long and tiring, but really fun, fulfilling and eventful day at Hachioji~~

The following day (7/29) was spent in Tsubasa’s hometown, Fujisawa, where we found Tsubasa’s primary school, visited the Shirahata shrine (where Yoshitsune & Benkei are enshrined), and oogled at hot *hadaka* pretty boys at the Shonen Beach ^^ Ribi had it all covered here.

Next up: JFC & Ikejiriohashi
(this should be a short one, so it shouldn’t take too long to write ^^)