Warning: My reports tend to be rather detailed and really long-winded as I’d like to read back myself again ~~ years later and still remember everything that had happened. Similar to last yr’s, I’ll split the Enbujo report into 3 sections.

Our seats this year:

We reached Shimbashi Enbujo early on 24th April. Not that we intended to, we just had our free breakfast in the hotel, slowly changed up, and took a slow walk+subway ride, but we reached early. The nearby train station this year only had the standard poster with the words “Takizawa Enbujo’08” and the “Inochi” logo pasted on one of its walls, with an arrow indicating the direction to the theatre. Very different from last year’s, which had his face on it and was framed and lighted. This year, it seemed that there isn’t as much promo for Enbujo compared to last yr, which is a pity since this yr’s show is SO MUCH BETTER!

Anyway, I can’t remember what time we reached the theatre… probably about 11am? And we were the 6th & 7th person in queue. In front of us was a huge white wowow van (with tinted small windows) and the people from the van were all dressed in black. They seemed to be talking to the staff who came out from the theatre. Some part of me was hoping that it’s a DVD van, yet I didn’t want to think that way so I chucked it to the back of my mind lol, didn’t wanna be disappointed later if it turned out to be wrong lol.

It was really windy that day. Skirts were flying and hair blowing across faces, even the metal stand (which displayed some notice) toppled due to the wind. And the wind seemed so strong that even the glass doors were pushed open on their own lol. We were 2nd in line (in rows of 4) to get into the theatre, and they opened the doors at about 12pm. Immediately, I rushed to the 2nd floor to queue up for postcards, sensus, furoshikis, etc etc, and was the first to get in the line (coz everyone else in front of me headed for the photos!) Irene was in charge of getting pamphlets (which were located downstairs). They limit all items to 10 each per person. So after I’m done with the 2nd floor, I had to buy another 6 pamphlets from the booth downstairs. lol. We found a locker nearby (thanks to nyanco for the directions ^^), and dumped everything inside!!

We had about 30mins left before the show. It was good that we had reached early. If we were behind in the queue, we would have had to queue up to the 3rd floor for the goods, and probably wouldn’t have time to put everything in the locker AND go to the basement for our ice creams ^o^ 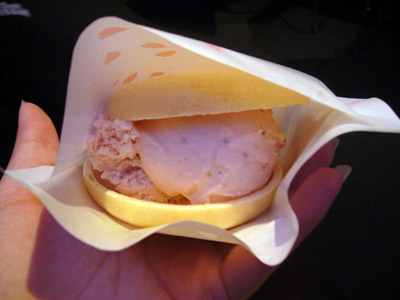 The sakura-flavoured ice-cream was nice, but the wafer was rather tasteless hehe~ I think it’s just supposed to be something for you to hold the ice-cream with, but I ate too much of it too fast, till I didn’t have any space left to hold, and the ice-cream started to melt fast lol.

After our little snack, we went upstairs to the souvenir shop and to take photos… of a photo of Takki among flowers. There weren’t any flowers displayed in the basement. All the congratulatory messages were placed on the wall in a small room near the entrance on the first floor. Takki’s photo was among the messages and wrapped with plastic. 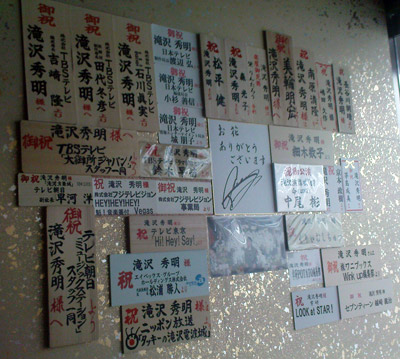 There was also a message from him which says “Thank you for the flowers – Takizawa Hideaki”. 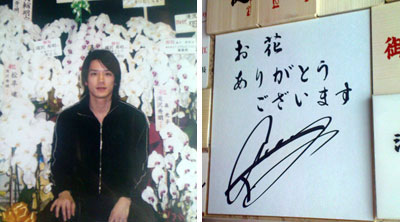 They were selling all sorts of T&T-related DVDs/VHSes/CDs at the counter on the first floor. You’d get a free Yukichan clearfile (same picture as the DVD cover) if you purchased the Yukichan DVD. They were playing Yukichan drama on the tv screen. And they were also selling the T&T Premium Live DVDs, Best Albums, Enbujo, One!, etc… 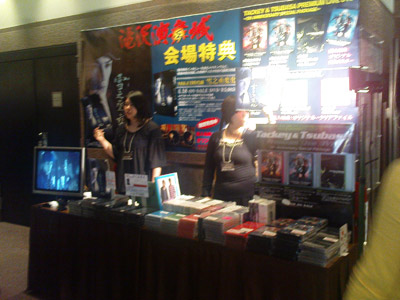 Last yr’s theme was Red/Black/Gold (gold waterfall & red sakura flower), while this year’s is Red/Black/Silver (birds & falling sakura petals) ^o^ Here are some pictures of the goods, almost all but the posters, since they are still rolled up now haha~~ Anyway, I got BOTH A & B posters in the end — Poster A is a definitely must-buy coz it’s soooo kakkoii!!! And real thing of B looks nicer than on pictures, so I decided that I just had to have it as well.

It’s more like a book! Hard-covered and almost 100 (thick) pages! So heavy! The journey back after the 2 shows that day was quite a nightmare! 8 pamphlets books on my left, 5 posters, 10 postcards, 10 sensus, 90 photos blahblahblah on my right, plus my own (heavy) bag, walking in a slight drizzle, taking the subway, changing trains, squeezing with ppl on the train… You get the picture haha. So worried that someone will crash into my posters coz the train was moving fast and everyone had umbrellas!! Dangerous items to be near to! As usual, I maintained the “If I fall, save the goods!!” policy ^o^ and Irene could only laugh at me when I said that. She suggested taking a taxi but I refused (gomen~~ I’m so broke… Taxi fare from Shimbashi to Ikebukuro could have bought us each X no. more live photos ne fufufu~).

Here’s the front and back of the pamphlet: 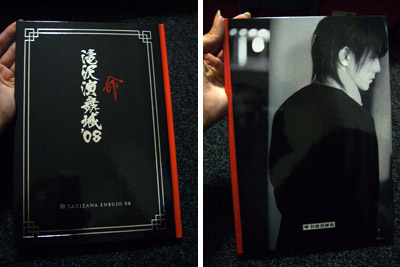 I love those monochrome shots of him keke~~ and the fonts used are very nice. It’s the style I like hehe~ Takki wrote alot this yr, and kinda wrote about all 3 yrs’ of Enbujo too. I read half of it on the plane ride back to Singapore (and laughed at some of the things he wrote!), but couldn’t continue coz my eyes were hurting. The red/white/black theme is still very apparent. And ppl who know me well enough will know that my fav. color combi happens to be these 3 colors ~ ^o^ This is my favourite picture from the pamphlet, really KAKKOII ^^ (kinda similar to poster A): 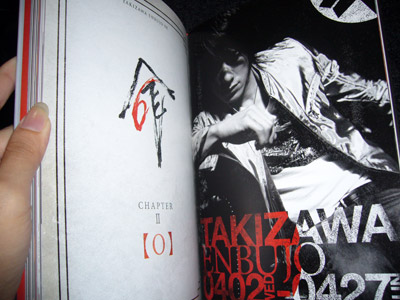 This one was not bad too. His outer vest is the crumpled type and I love that tie :) 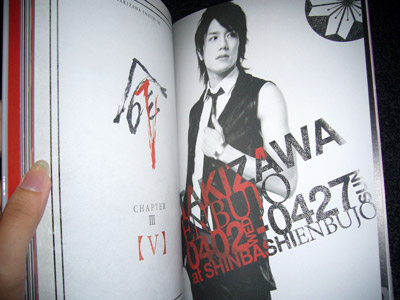 Then there’s a sole picture of him in kabuki costume, and then a series of shots from beautiful Miyajima, reflection of the structures and Torii in the water, Tono with the Shanao “cloth” etc. This year’s pamphlet has few ancient wear photoshoot – unlike last year’s, but it’s more portable (at least it’s not larger than A4 size^^), thicker (more contents) and hard covered as well hehe!! 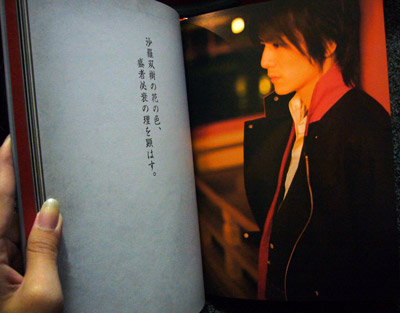 There’s this conversation thing between Takki x Fujigaya x Kitayama x Totsuka x Kawai. And I love how the page number actually reflects Takki’s birthyear!! It was exactly on PAGE 82!!! 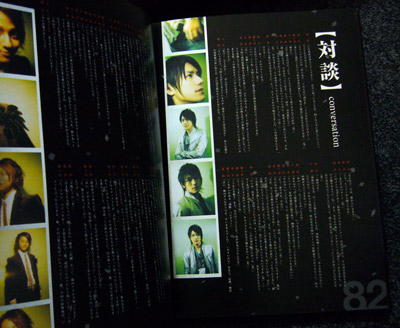 I prefer last yr’s photo shoot at Kuramayama. This yr’s ones… well, he looks more tired, and I didn’t go “WOW” when I saw them lol~ Poor thing, they had to get this show done in such a short time. They should have used the poster A’s picture for the postcard ne… but the packaging was nice, like an “ang bao” (chinese new year red packet) – just that it’s silver in color wif white prints. I also like it that the “Takizawa Enbujo 08” at the back is in english! 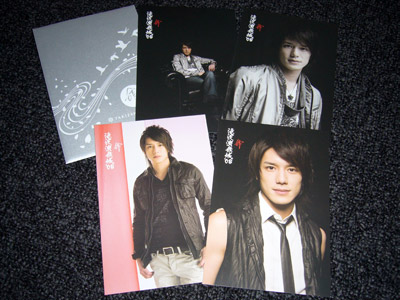 Purple – Yoritomo’s color lol. Or maybe it’s Yukinojo’s color hehe. Coincidentally, I was wearing a purple thin cardigan for the shows lol. The real thing looks better than on pictures. The quality looks quite good. I said “looks” coz I haven’t opened the plastic yet hehe. It’s kinda stands out from the silver/red/black of the rest of the goods. 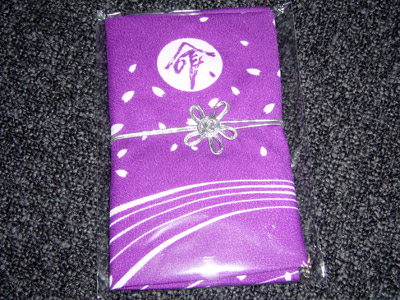 Very pretty. And the casing is silver :D 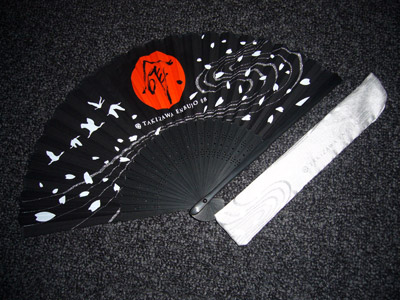 I got the photos during the 2nd show, as I didn’t want to know any spoilers before I watched the first one lol. It was so hard to choose! I wanted something to remember each performance by, but there were different variations of each. And it was really expensive ($7 per piece of glossy photo wrapped with plastic lol). I had to buy photos for 3 other friends, so I got theirs first (with the help of Irene~ arigato!), then ticked off 40 for myself! 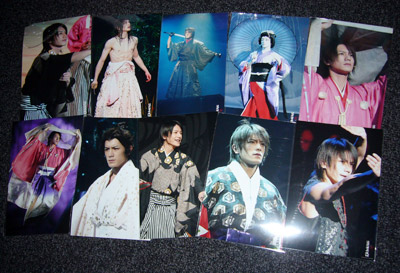 These are some of my favourite shots! A pity there weren’t any on the make up scene! There weren’t any from the “o-shichi” (kabuki) story, there weren’t any from the “sagi musume” (kabuki) either, and only ONE hadaka one from the dramatic bloody finale (and they photoshopped off the plaster on his nose, the red marks on his hands, and some of the blood lol). At least they had ONE kabuki shot, so that was the no.1 photo that I had to get. I got LOADS of bubble-playing photos lol~ coz they were too cute! And I took ALL the Chuushingura pics coz I simply loved that segment!

Last yr, the photo album was a J-web exclusive. This year, it’s for sale at the venue. Each album can take 40 live photos. The inner pages are black based, and good quality, so it’s really a must-buy for me. I don’t remove the plastic wrapping of each individual photo, so I can only slot 20 photos in one album and still keep its shape lol. So I got myself 2 photo albums, to contain all my extravagance hehe… 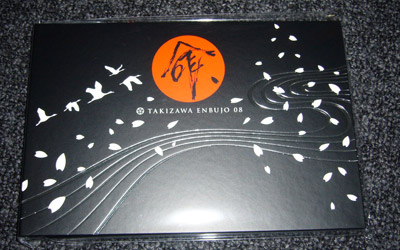 During our last show on the 25th, I finally got to try the Kani seafood soba salad!!! Something that I didn’t have time to try last year. And it’s the nicest thing I’ve eaten in Japan during this trip!! Really! Oishikatta!!!! It’s MY type of food haha. And to me, this is the best food of Takizawa Enbujo so far ^^ I could taste sesame oil. If it’s available again next time, I’ll definitely have it again hehe. Loracyn & I made reservations before the show, and they had a table for us when the three of us arrived at the cafe during intermission :) 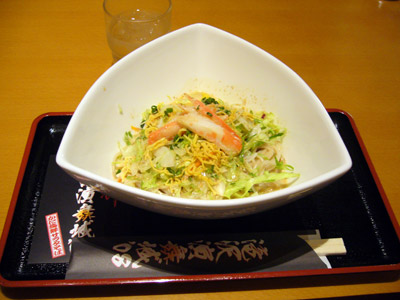 Went to queue up for this the moment we entered the theatre on the 25th. I bought the Western one as I prefered the meat to the cooked salmon (I only like salmon when it’s raw! Hahaha~~) Anyway, we ate this at night in our hotel room, and it was nicer than last year’s. The rice was definitely tastier (last year’s was white rice only), and I like the cheese omelette and meat patties, and that mayo stick thingie (dunno what it’s called~ the thing below the 2 pieces of meat – very yummy hehe). The only thing I didn’t like was that yellow longish piece of dunno-what (bottom right)… seems like potato filling with weird sweet outer layer… yeeeeksss… 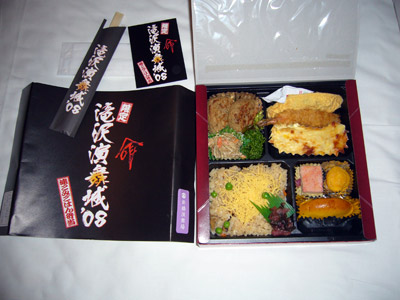 But still, since it was TAKIkomigohan bento, I finished EVERYTHING!!! Gochisousama~~~ 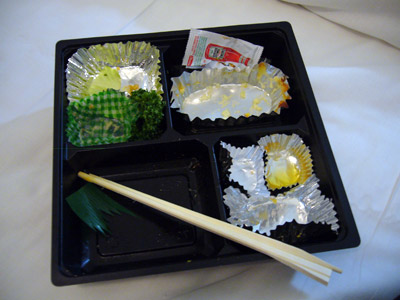 That’s about it for the theatre, food and goods ne. I’ll start on the real report soon hahahaha…