Christmas Day at Hachioji :D This time, no search for primary school = no cow farms, thank goodness. On my itinery, it was mainly Kyon for today!

It was only Bonnie and I going for this “pilgrimage” *lol*, since Stephie was meeting her friend, and Leli joined us later. We took the Yamanote Line from Ikebukuro to Shinjuku. And it was sooo packed at the train station, on the train, and I got sick, and had to pay 100yen just to get inside the public toilet!! 100yen!!!! In Singapore, public toilets are mostly free, and if we have to pay, at most it costs us 20 cents ne! 100yen is like 6 times that amount? *faints*

Then, from Shinjuku, we could finally have a seat on the train as it took us to the peaceful suburb of Hachioji. Ah, I’m back in Takki’s hometown again ne~ the feeling is good ne! ^^ I had onigiri *again* on the train, and we took pictures of the scenery while recalling everything that happened at the shows… It was on the train that I took a picture of our nails! LOL! Might sound funny but we didn’t even plan for it, and when we met, Bonnie and I actually had the exact same colour nail polish!!! :D 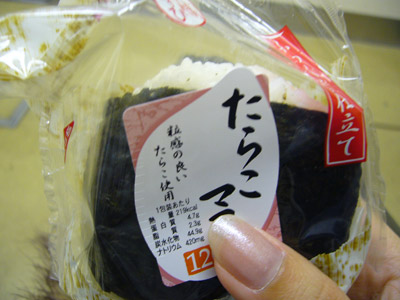 Time seemed to pass so fast when we were talking about Tono! We talked about all the kawaii things he did in Kimagure JET, his funny actions during the Matchy-san VTR, his Crazy Rainbow actions, his Yuki-chan hairwig, that Christmas Tree headgear, the uchiwa-kissing (and puking), the “GA” uchiwa… Everything and anything we could remember from the shows!! Soon we reached our destination station~ This is just one of the pics I took on the train: 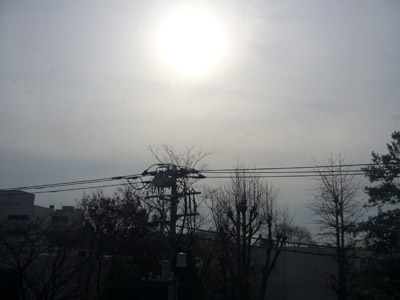 Along the way from the station to the park, we were talking non-stop about the concert, Takki and Kyon, etc etc… and surprisingly I didn’t feel cold at all!!!! NOT AT ALL!! LOL~ And we were so engrossed in our talk that we missed a turn *LOL* Ne, I really love that place ne… It’s so peaceful~ 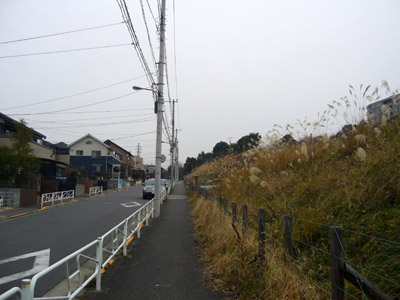 Then we finally found the Kyon Papa house! Yes, the house that I missed in July hehe! It really IS the green house that I saw from far then! ^^ Ureshii! There was a woman hanging out her clothes, so we waited for her to go back into the house before taking a shot of the house lol~ 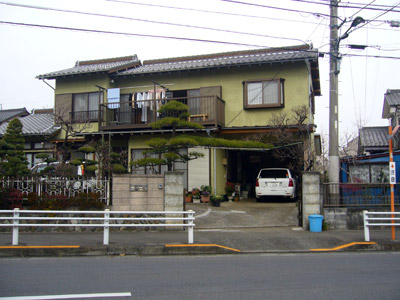 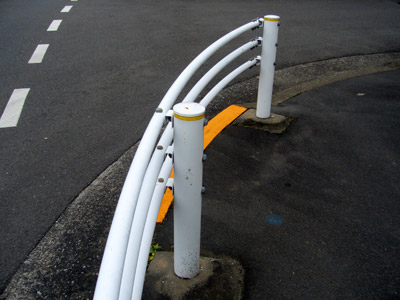 Then, we went to the park! This time, the leaves are mostly yellow/brown, and since it’s winter, there aren’t mosquitos! Yay!! There wasn’t anybody around except us!!! ^^ The slide is REALLY steep, don’t get fooled by the pictures or television. It is much steeper in RL!! 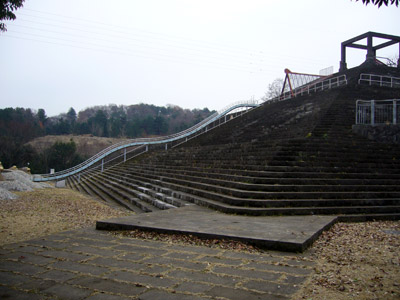 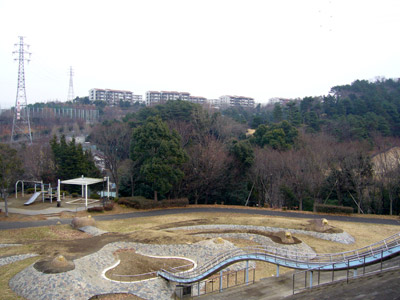 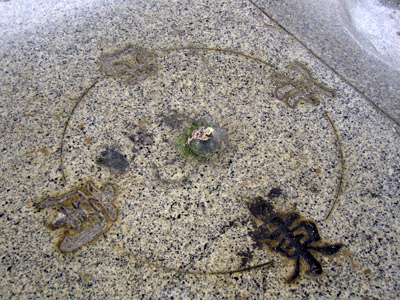 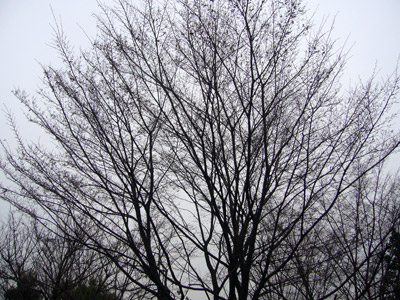 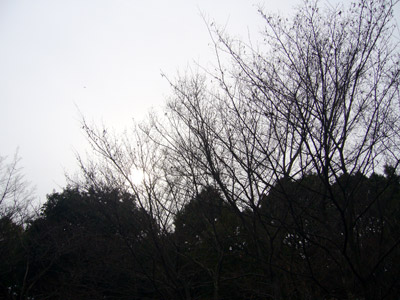 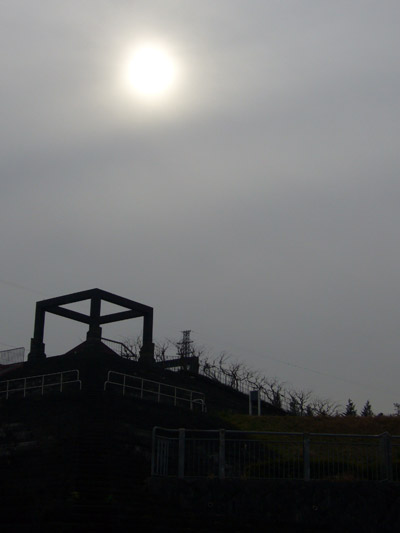 And more of the leaves and trees: 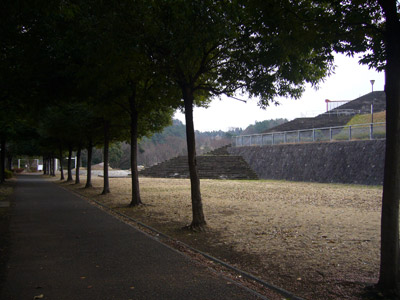 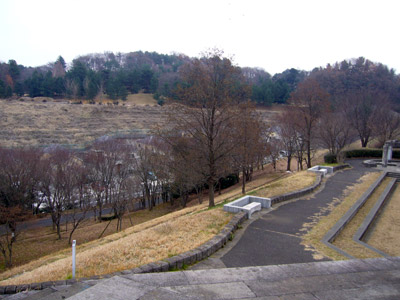 After lingering there for awhile, taking pictures of ourselves using my camera’s timer, we left the place. The weather was nice, and we just continued talking about Takki, blahblahblah *insert fangirl gibberish* (and we even talked about cars’ numberplates in USA and Singapore, and Chilam too? lol~) Gosh there’s SO MUCH that we can talk!! Along the way, I took a pic of the “lalangs” (what I call them, even tho I think they’re not~lol~) which I found so pretty against the sun~~ 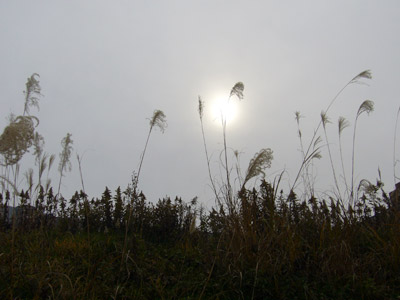 Then we headed for Nishi-Hachioji, to the 100yen Ramen shop. This time, I tried something different – Char Siew Miso Ramen and Gyoza. This was a much more expensive meal than the one I had in July. I still prefer their Shio Ramen actually, the 100yen plain ramen :) 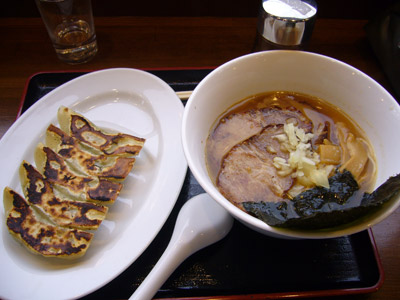 When I returned my tray to the boss after our meal, he said to me in chinese, “xie xie!” (thank you!) ah, he’s nice ne~~ he probably knew we are Takki fans :) and probably thought we were from Taiwan? ^^

Then we proceeded to Ebisu, and met Leli there at the station. Wow! The leaves there are really pretty~~ reminds me of Romeo & Juliet kekeke… I love yellow leaves like that, couldn’t help but to take a picture of them while walking… 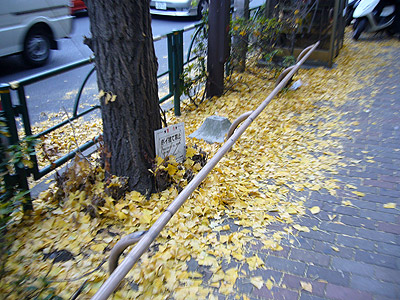 With my hand-drawn map *lol*, we walked on for awhile and found our next target: 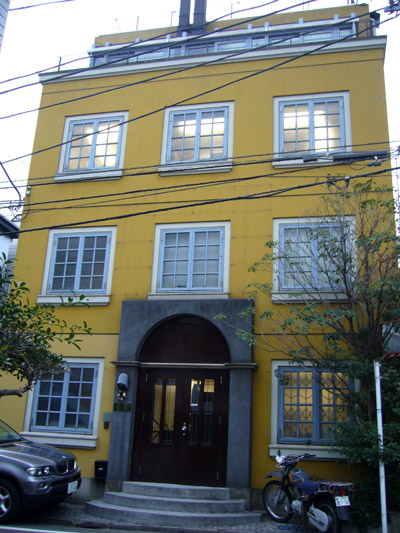 BROOKLYN HEIGHTS desu! a.k.a. Kyon’s apartment! It’s an office in real life~ and I got the directions from its website lol~ It was quite easy to find ne (compared to the ardous search for Takki’s primary school, apartment and nursery in July). The building looks smaller in real life than in pictures/on TV! And the lane separating Kyon’s and Honda-san’s apartments was more narrow in real life… 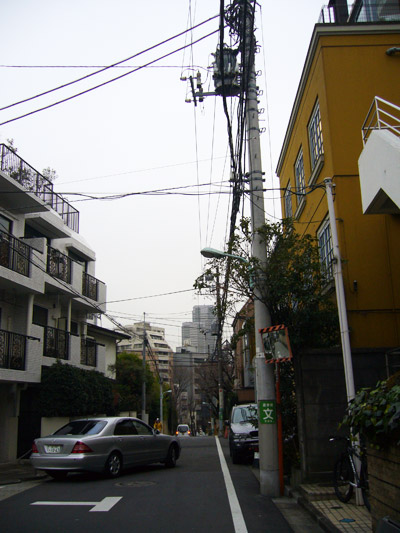 Then we walked further on, this time with a hand-drawn map from a friend. Somehow we came to a Y-junction and took the wrong road… After walking for some time, I thought something was wrong, so I told them to turn back *scorpios always follow their instincts I guess* But Leli & Bonnie’s feet had blisters so it was hard for them to walk ne. Surprisingly, my legs didn’t feel tired or painful at all! *weird* Instead I was having difficulty breathing!! Every breath I took was painful (from my nose down to my throat), it was quite uncomfortable, and I found myself drinking tea and water and covering my nose with my jacket (to try not to breath in the dry air? *baka*)

Somehow, after walking for sometime, we found it: 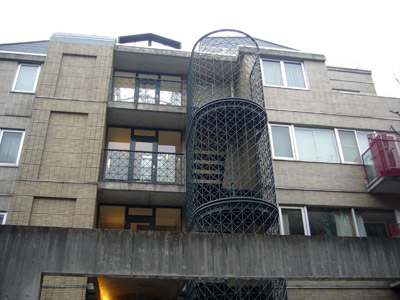 Then, with a real map (printed from google maps) in hand, we headed for the final destination. This was much easier to find since the map was accurate. After walking past a few streets and a university (and some schoolgirls who seem to be kyaa-ing at a schoolboy *lol*), we found it. 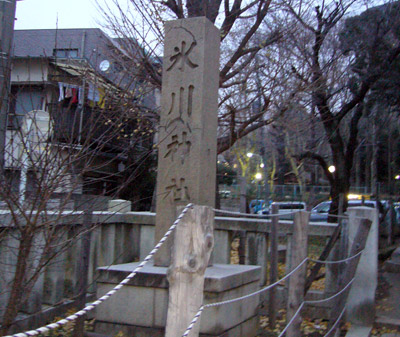 I think this was where Nao & family were distributing leaflets to the neighbourhood. In any case, there was only 1 lamppost there so the pics came out really dark. I had to edit them. Sorry for the picture quality. 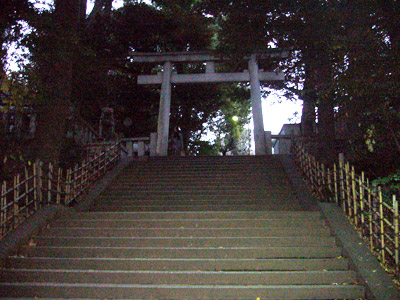 This staircase was where Nao came to find evidence of his mom’s death, and where Wasuke (their dog) appeared from the bushes on the left… 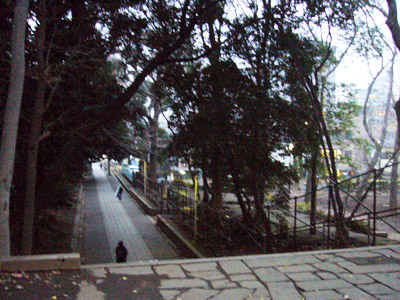 And this other flight of steps was where Surumi sat and ate Hiyashi Chuka, and also where Kyon & Surumi quarrelled.

Sou, we ended our “pilgrimage” earlier than expected. Took a bus to Ebisu station and JR back to Ikebukuro. We bought quite a lot of food from Family Mart and ate them in our room. Stephie also came back with her food. She had gone to the Jshop that afternoon, so she brought back all the new shop photos for us!! KYAA!!!

So we were kinda having a mini camp session on our bed~~ I drank some biiru and someone said I was drunk lol~ I’m not drunk yo, I just LOOK drunk? ^^ 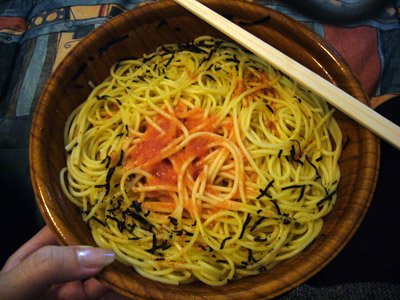 There was no Zubari that day… sadly… so we started recalling more neta from the shows. Then we talked and talked about Takki again until it was time for Leli to return to her hotel (she had to catch the Shinkansen to Nagoya for the cons the next day~~)

Had the Nattou rice thingie for breakfast. IT WAS OISHI!!! I don’t know why but there wasn’t the “nattou-ish” smell at all? And it wasn’t very sticky, so it was nice ne~ probably coz it was cold too hmmm… I’m not biased when I say this lol~ I think I’m starting to understand why Japanese people (like Takki nd my Sensei too!) love to eat nattou so much… 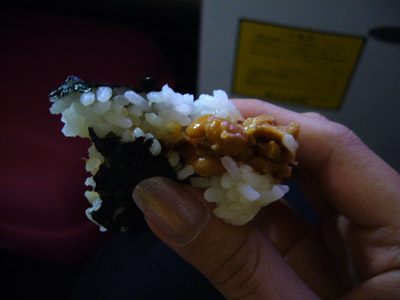 Just realised my pinku luggage-chan was in the picture as well :)

We checked out and left our luggages at the hotel while we proceeded to Harajuku for some last minute shopping. I took some pictures at the train platform. 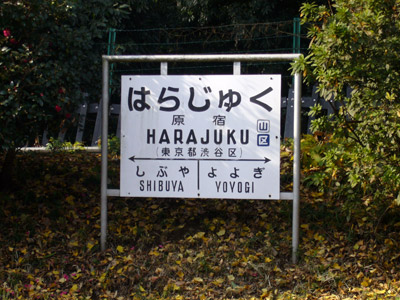 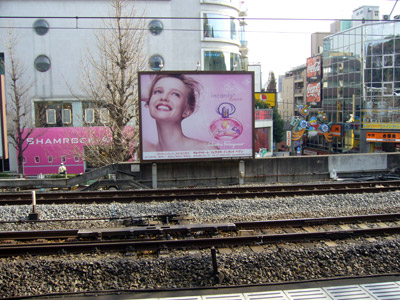 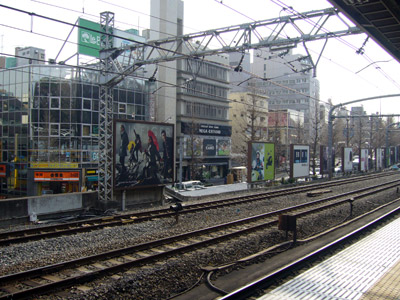 Bought some stuff from the Dafuya shops, but couldn’t find any concert live pictures for sale… Then we went back to our hotel, and lugged ur luggages down and up the flights of stairs at the station. There was a nice guy who helped Stephie & Bonnie carry their luggage (coz Stephie was making all sorts of funny noises *LMAO*). The nice ojisan offered to help me carry too but it was daijoubu for me, so I told him I’m alright~ Only when checking in our luggages at the airport did I realise that my luggage was actually the heaviest *sweats* 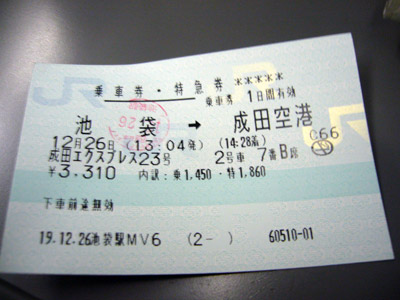 My Narita Express ticket. Heck the 3,310yen! We decided not to take JR (although it’s 1/3rd the price AND faster) coz we don’t wanna be carrying our luggages up and down more flights of stairs, changing trains and squeezing with people on the trains…

We did some last minute omiyage shopping at Narita Airport. But Bonnie’s flight was about an hour earlier than ours, so we had to say goodbye to her quite soon after reaching. We hugged…. and hugged again… It’s like we wanted to go home, yet we also don’t wanna go home at the same time ne!! I REALLY MISS YOU, BONNIE!!!

Then Stephie & I had Ramen at one of the shops in the airport mall. It was cute when the ladies in the shop tried to peek into my Enbujou shopping bag (they apparently saw my uchiwas sticking out!). They were giggling~~ lol~~ I was also wearing the 24hr TV yellow t-shirt and carrying a poster tube, so I guess it’s obvious that we were fangirls lol~ 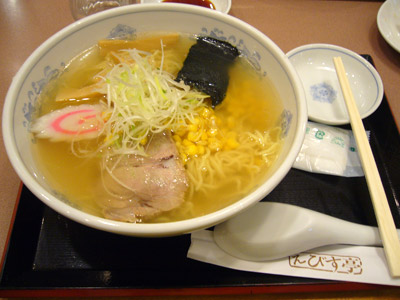 On the flight back, Stephie & I listened to the recording again, and laughed at our screams/laughter~ then Stephie took out her shop photos while I flipped my pamphlet again~~