From the time we woke up and headed off to Hachioji, to the last speech that Takki gave before we all left Olympus Hall… Everything just felt so “special” throughout the entire day. Afterall, it’s very rare for us to be in Hachioji with the Hachioji prince himself ne!

Perhaps it’s due to the fact that it was a small venue… or that a majority of the people there were diehard Takki fans… But whatever it was, you could feel a strong sense of unity or “一体感” inside the hall. Normally, the audience would have an afternoon show to warm up before the evening show (which is usually more high). But this time, there was only one show, so it was really a “now or never” kind of feeling. And honestly, I have never seen such a loud and hyper crowd before!!! We really danced, laughed and screamed like crazy lol

That’s why we’re really glad Jticket International opened up for us. Otherwise, we probably wouldn’t have been able to attend this show without shelling out a huge fortune. Even the Japanese fans had a tough time getting tickets ne… According to newspaper reports, the JFC received 45,000 applications for this show. Only 2,000 people actually made it into Olympus Hall. So in that sense, we were really one of the lucky ones ne~ 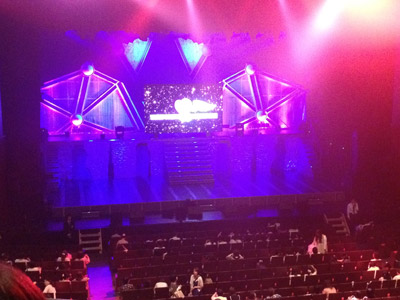 A picture of the stage taken from our seats

Our seats were in the 3rd row on the left side of the 2nd floor. At first, when we got our tickets, I have to admit… we were grateful to even have tickets in the first place, but we were slightly disappointed that we didn’t win 1st floor like some of our friends. But when we finally sat down, we realized that our seats weren’t that bad! The people in front of us sat through most of the show, so we had a clear, unobstructed view of Takki and the stage. Sitting on the 2nd floor, we could also see the entire venue as a whole, so it was quite a breathtaking view when the sea of people below us were waving their pompoms and penlights.

We noticed that reporters with cameras were stationed on the 1st floor, while journalists from different newspapers and magazines sat in the middle section of the 2nd floor. We were sitting quite close to them, so we occasionally peeked over at them to see what their reactions were of the show. They all looked kinda serious (they were working afterall) and remained seated throughout the entire evening, but they would occasionally laugh at Takki’s jokes. There were also people standing behind the last row on the 2nd floor. These were the ones who got “standing tickets” (Olympus Hall sits around 1,800 people, but they added 200 more standing tickets to try to accomodate more people).

Anyway, we made sure to enter the venue at least 15 minutes early because we knew that before the show, they would play the “Daisuki” and 24h Cosme parody videos that Takki produced. Soon after we sat down, the big screen above the main stage suddenly began playing the first video, which was about Takki becoming the friendship ambassador of Micronesia. They showed photos of Takki taking pictures of Micronesia with his camera. They also showed some of the photos that he took of the beach and the Micronesian people.

The next video was basically a commercial for FRaU. Shalala was playing in the bg as they showed a slideshow of all his photoshoots from his “Tackey Times” article.

Next, we heard the opening instrumental of Koiuta, which meant that it was the start of the “Anata Dake ni Daisuki” videos. These were short clips (about 5~10 seconds long) where random individuals from JE tried to declare their love by looking into the camera and saying “Daisuki!” lol~ Takki said that he prepared different batches of videos for each venue. The first half of the Hachioji “Daisuki” videos were as follows :

After this, they played the original Takki version of the 24h Cosme commercial. Next came the parody… and it was Takki wearing a long blonde wig, fake nails, and a draped white dress with long sleeves (covering any signs that he’s a man) as he laid seductively on a white bed!! LOLLL!! So funny~ And at the end of the video, he even winked seductively at the camera! buahahahaha~

Then they turned off the screen. After about six minutes, they turned it on again and played a commercial for Takizawa Denpajou and TakiChannel. It showed a little bit of Tono as he’s inside the Denpajou recording studio. Then the opening instrumental of Koiuta began to play, as they introduced the second half of the “Daisuki!” videos.

Then finally, they played the last 24h Cosme parody and it was Takki and MSM dressed as nerdy otakus (high waisted jeans, plaid shirts and hippie headbands) doing a nerdy otaku dance in an empty classroom!! LOLL~~ At the end, he had this really sneaky look on his face as he looked into the camera. Then in a nerdy dasai voice, he said “Make…up… all… night.” hahahaha~

Soon after the video ended, the whole venue began doing the “Takki Call” (Takki! *clap clap* Takki *clap clap*) Our rhythm was slightly off at first… the 2nd floor was yelling “Takki!” while the 1st floor was clapping (and vice versa). We stopped a few times to synchronize the chant, but eventually, we got it right.