I travelled alone, took the 6am flight, the only NWA flight to Japan every day, so I’ve to be at the airport at 4am. Only slept for an hour as I couldn’t finish packing lol. My family and my bf sent me off at the airport. The plane ride was fairly smooth, and as the seat beside me was empty, I laid down for a while, though I couldn’t sleep… 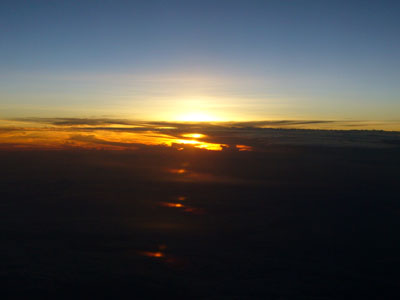 This was my meal on the plane. Lunch, I think? 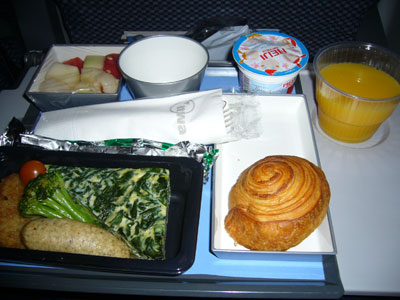 I found the Meiji strawberry yoghurt packing really cute~ reminds me of Azuki! ^^ 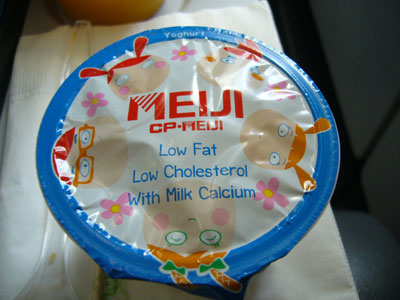 And I watched Hana Yori Dango Final! Love Makino and Domyouji at the island. I think she’s really pretty and cute na~~ Checked the music and there was V6, Larc en ciel, etc… No Takki, no T&T… Then I spent the remaining time on the flight listening to and watching the music clip of “WITH LOVE” on my ipod, and completing a friendship band for Azuki. 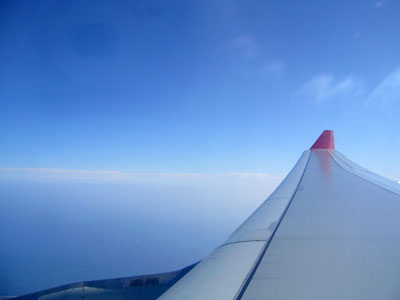 6+ hours later, and I arrived at Narita at about 1.15pm, earlier than expected.

After walking a round of the Airport Mall & buying a white sweater from Uniqlo, I found my way to the ticketing office to exchange my JR pass, but I couldn’t take the earlier NEX (which comes only once in 30mins) coz it doesn’t go to Shinagawa! The earliest NEX there was at 2.45pm and it’s cool how cars 1-6 will split from cars 7-XX after Tokyo station. I killed some time at the station, making a bracelet for myself, drinking green tea, sending SMSes home, etc. I was so bored I took pictures of many things, from my JR Pass, to that earlier NEX which I couldn’t board, to my luggages… 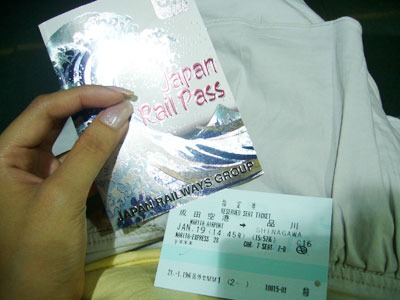 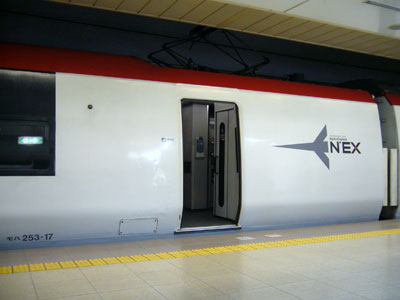 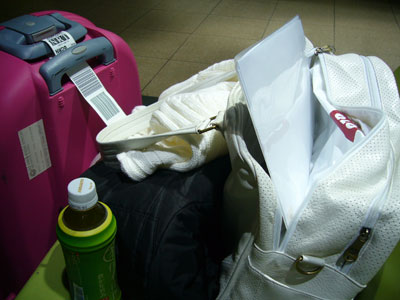 Then when I got on the NEX, I started listening to Ai Kakumei jacket C on repeat… Ai Kakumei, WITH LOVE, Home Party!!, Ai Kakumei (karaoke), WITH LOVE (karaoke), Home Party!! (karaoke)…. on and on and on…. as the ride was 1hr 10mins, the music was so soothing – that I finally felt that I could fall asleep, but I told myself I can’t, or I might miss the stop. Argh, Murphy’s Law… And do I have to mention how none of the guys asked if I needed help to carry my luggage up to the 2nd shelf? The ground level was full. And they just cast me a look and walked off *shakes head*

When I reached Shinagawa station, we were supposed to meet at this “pink point” that Azuki drew on a map. But before I could even TRY to find the point, I heard someone calling “micccchhaannn”… and saw something blue ‘flying’ towards me & hugged me hehehe~ it was Kat! Haha! and she was holding Hidezo!! OMG!!!!! She found it for only 7,000yen! Soooo cheap compared to mine….. Urrgghh… Lol! Then I met Azuki, and she’s just like what I imagined! So pink and kawaii!! XD And her Takki Ai Kakumei doll is soooo cute!!!

I bought a sandwich, and we boarded the shinkansen to Osaka. A 3hr plus ride, in a train without aircon! I got a little train sick lol… We had our luggages in front of us at our seats, it was so squeezy, but I had a fun time playing with Takki doll, doing photoshoots for him!! XD 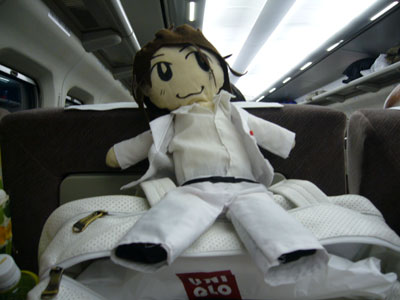 We saw Mount Fuji but we were on the wrong side of the train, and so the photo showed most of what’s inside the train instead. You can see a little of Fujisan and our heads ^^ 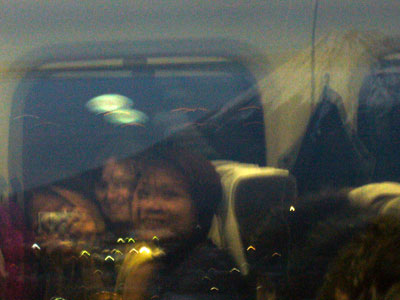 At about 7.30pm, we reached Shin-Osaka station, and proceeded to the spot where we should wait for Nyanco. After only about a minute or so, I heard someone calling “Mich!” and there was Nyanco!!! Finally! After months of working together and chatting online, we finally met! hehe~~ She’s really well-dressed and elegant naa~ urayamashii~ XD We all proceeded to take the subway, and made our way to the hotel, dragging luggages across streets and all that… *Phew* Finally, we got there & the receptionist could speak mandarin! Yay~ I had magazines and Ai Kakumei CDs from Mu-Mo sent there (the postcard is so gorgeous!!! *DIES*), and Nyanco brought a luggage full of stuff for me too… My luggage was suddenly doubled…

We went for dinner at a nearby shop, and had probably the best food of the entire trip – salad with fried pork and raw egg! OMG it’s soooooooooo good that we just HAD to go there again to eat it the night before we left Osaka!!! 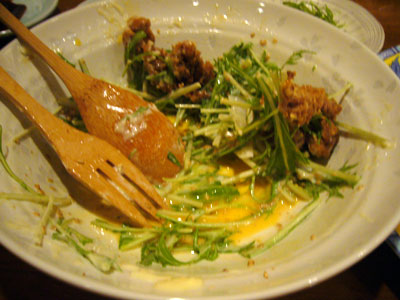 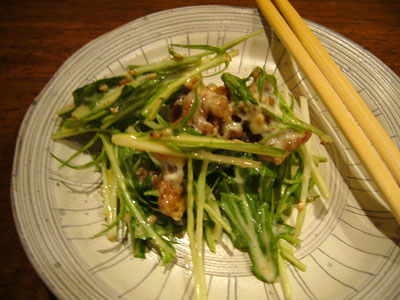 The other food there was good too. I love the Yaki soba, Yaki udon and Sashimi (which we could eat everything including the ‘flowers’ on the plate) too. And we had sake too :) 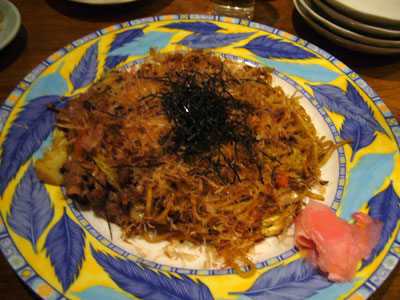 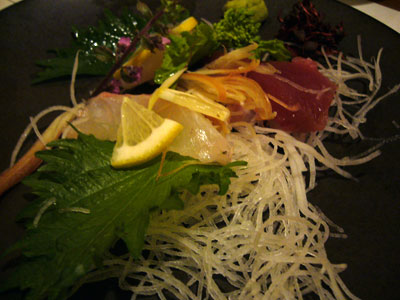 The lady boss was nice and she could speak English. We told her about Takki, Takirev, Ai Kakumei etc.. and she probably thinks we’re mad lol. But she seems slightly shocked that Azuki could speak Japanese well~ and shocked that Takki has fans around the world — we mentioned Singapore, America and Spain coz we’re from there, but also mentioned Malaysia, Taiwan, Hongkong, China, Germany, Italy, France, UK, Canada, Australia, New Zealand, Russia etc etc… you get the picture LOL…

We talked about Takki, Takki, and Takki… No prizes for guessing… And by the time we realised it, Nyanco missed her last train home! She took a taxi back, the 3 of us went back to our hotel room, and I finally got to sleep after unpacking some stuff.

Lol~ that was only a few hours in Japan and I wrote so much already.