I decided to continue writing about the trip first, before going back to the shows reports coz god knows how long I’ll take to get Act 2 up, and then there’s still Jinsei Kakumei report lol.

Actually, for Day 5, I spent it only at 3 places. After breakfast, we took a train to Harajuku. And first thing I did was to check out the Johnnys shop. As it was a weekday, there wasn’t a queue at the overhead bridge. But the shop itself was packed. Both upstairs and downstairs. I left my family waiting outside, thinking it wouldn’t take long. And I took down the numbers of Takki’s Hikari Hitotsu photos WHILE queueing up to pay lol.

There were about 8 more people in the queue when I decided I should tell my family to go walk walk first. So I took out my keitai and started texting, but before I could send, Younger Bro & Mom came down to find me (I was in the basement). I told them to walk to where the Takeshita Dori entrance was (I showed them the place on the first day ne~), and said I’ll go there and find them later.

I zenbu-ed the Takki photos – from ‘Hikari Hitotsu’ and ‘Johnnys Sports Day 2009’. As a result, I parted with close to 10,000yen when I left the shop. Then, I hurried over to Takeshita Dori to find my family, who were only 2 shops down by then. It was 11.30am then, and I had a show to catch at 1pm (Jinsei Kakumei), so I told them to wander around on their own… have lunch at Lotteria or Macs or anywhere they want. We were thinking of where to meet after the show, and I told them I’d be done at about 4.30pm. I think I suggested coming back here to find them, but Mom said she doesn’t think they can spend 5 hours here shopping in Harajuku. So, we agreed to meet back in the hotel at 4.30pm!

I zoomed off to the shop to find Kat’s show tickets. And ended up buying about 10 Takisamacon photos from the shop, while waiting for Kat to call back. And after purchasing her tickets, I rushed to the station, and took the train towards Yurakucho.

On the way there, I received a call from N-san. She said she’s already at the theatre! Ah, I told her in my broken Japanese that I’d be late, but she said she’ll wait for me. When I finally reached the theatre, it was already about 15 mins to the show. I rushed to the toilet, put all my stuff in the locker, and then we talked for a while before entering the theatre. Her seat was on the first floor, mine was on the 2nd floor. And it was our first time watching Jinsei. Anyway, I’ll talk about the show in a separate post — hopefully :)

The show ended at slightly before 4pm. And I took a train back to Ikebukuro, and went back to the hotel. When I reached the room (the key was with my brothers), I knocked on the door a few times. Actually even before knocking, I already had a strange feeling, coz there was no noise coming from the rooms (usually we can hear TV sound, or people talking etc)… Hmm, there was no response, and then I knew I had to check my handphone. And tada~~~ message from bro: “Hey we still in harajuku shopping…” I almost flipped! LOL! Still shopping? I thought someone said it’s not possible for them to spend 5 hrs there?

I called him back immediately, and we agreed that I’ll take a train down again to Harajuku! LOL! When they finally came to look for me at Macdonalds, my brothers were carrying huge bags! They have bought a pair of shoes, a bag each, jeans and jacket. Apparently, they walked from Takeshita Dori, to Omotesando, and back… and they told me they haven’t shopped enough. LOL.

We decided to walk towards Omotesando again, and I took the chance to enter another of the unofficial shops there, and got myself some chibi Takki photos + FC bulletin Vol. 32 :)

Then I brought them to Jonathan’s for dinner. The food was really delicious!! Bro pressed the bell several times without knowing that he was calling for the staff. It was quite funny. Not much pictures above ne~ so here are some food glorious food haha~ starting from my omu-hash rice thing. This I think was the best. It was the most expensive too, 1100yen if I’m not wrong. 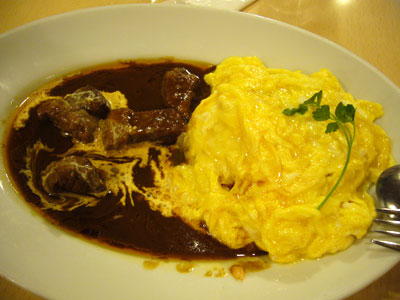 This is Dad’s chicken thing… 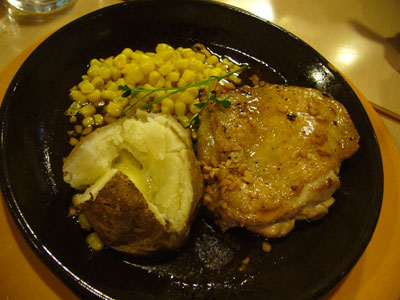 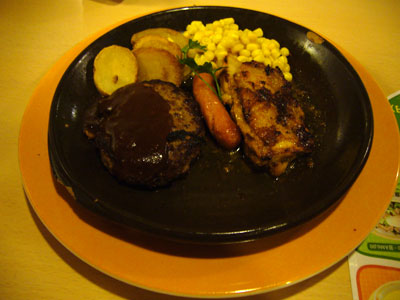 And both Mom & Bro had this light hamburg bacon egg thing. 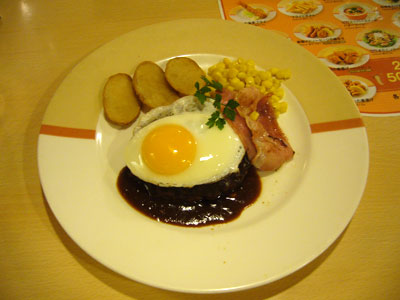 And after dinner, guess what we did… Shopping! Again! lol~

We went to the huge ZARA. They were having a sale. And I got myself a skirt (which I wore for CNY lol~). Bro got himself a pair of shoes, and I can’t remember what else they got, but the guys were taking such a long time upstairs, trying out many stuff. And I was so bored haha… I don’t really like shopping (or rather… I can’t afford to spend my money on clothes and accessories~). After spending what seemed like 2 hrs in ZARA, I brought them to the Meijijingumae subway station… And I took a pic of the subway map on the wall lol. 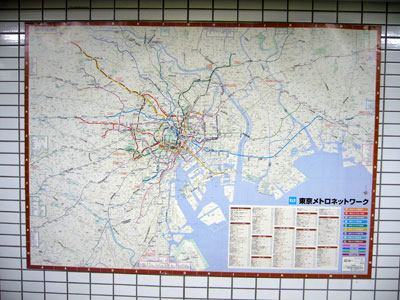 Just before the train stopped at the platform, I took a pic of this advertisement for my bro. He couldn’t get his cam out in time, while I had mine with me. Just posting it here coz there’s not much pictures to post for this day lol. Anyway, it’s quite an interesting advert. 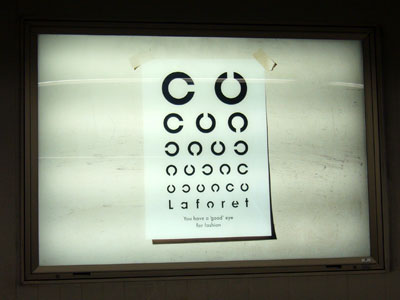 Then, back to Ikebukuro, to the combini… and I found Takara Can Chu-hi LEMON flavour!!! XDDD Like FINALLY!!!!!!!!!!!! XDDDDD 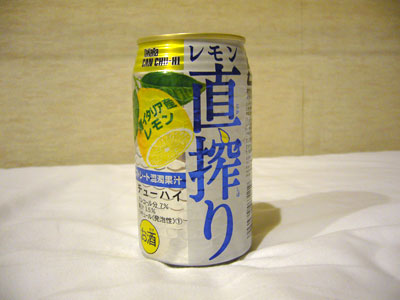 And back in the hotel, I took some photos of the photos bought earlier that day~~ first is a “group shot” of the Johnnys shop photos! You might not be able to tell from this pic, but the Hikari Hitotsu photos are really gorgeous!! While the Hikari Hitotsu ones are KAKKOII, the Jsports 2009 ones are KAWAII!! ♥ 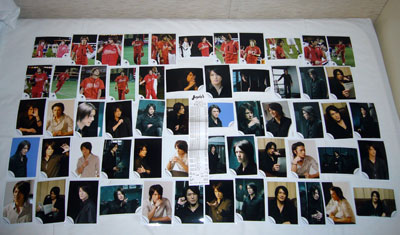 And here are the 10 unofficial photos that I bought. Takisama!!!! Kyaa~~ so much skin hehe… The large photo was Takki at P’s solocon :) 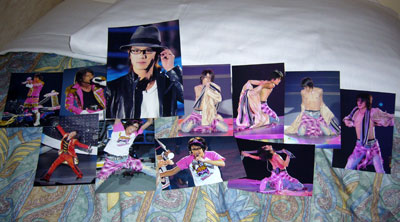