This is the first time I bought goods at every show I attended. This trip was really really memorable, and it’s one where we travelled ONLY for Tono. We watched one show a day, which means, we saw Tono every day (apart from the days we flew into Japan and back to Singapore). We gave up our Fish market & Ramen museum trips on 2nd April just to watch that extra show. But it’s so worth it… I love Enbujo… so much that it’s hard to heal the lovesickness this time….

Before going onto the goods and food of Enbujo this year, I have to talk about this “Takki Logo” which we found appended to almost all the goods this time.

The moment I saw that, I noticed the words “タッキー” immediately!! Maybe my eyes are just that screwed up~ XD It’s really cleverly designed ne, using his name to form a 3D cube structure. It appeared at the back of the pamphlet in gold – against black background – and on the shopping bag, clearfile, photo album, etc… – in red against white background.

Okay, now for the goody goods:

Pamphlet (2,000yen)
The pamphlet is actually a gold book slipped into a black paper casing, with a crescent cut out in front. This year’s theme is black & gold :) 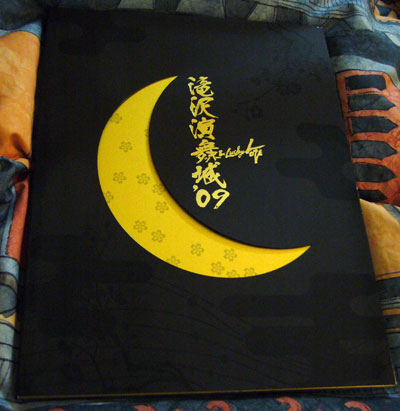 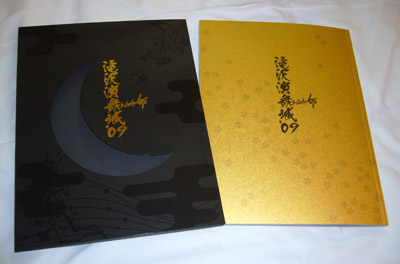 My first impression when I saw it at the 1st floor counter = TOKYO BANANA!! XD

Hahahahaha~~ it looks so much like it, doesn’t it?

And the inner pages have nosebleed-infusing pictures of Takki in samurai outfit!! Yoshitsune-sama daisuki!!! My favourite of the samurai lot is the black & white one. KAKKOII!!! And the one with the head gear gives off a yasashii Yoshitsune feel ne. 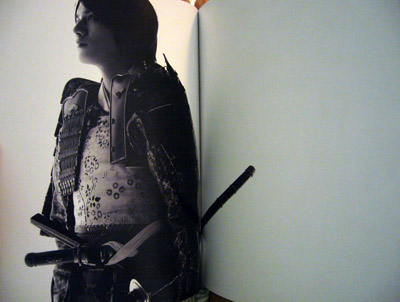 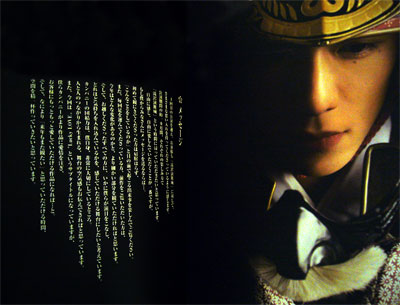 And here are some more of the pretty images from the pamphlet~ and as usual, I LOVE the behind-the-scenes pages!! They captured so many different expressions of Tono~~ that got me kyaaaing like mad when I was flipping the pamphlet the first time hehehe~~ 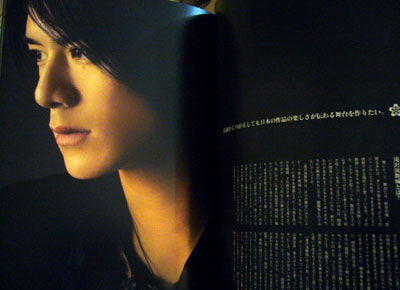 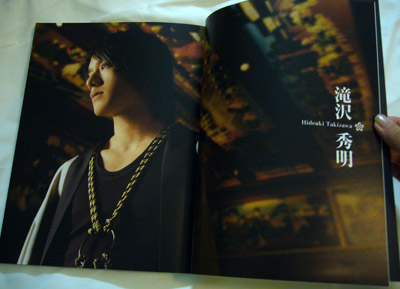 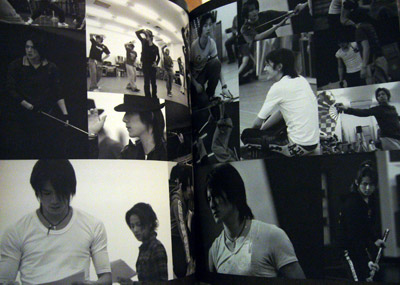 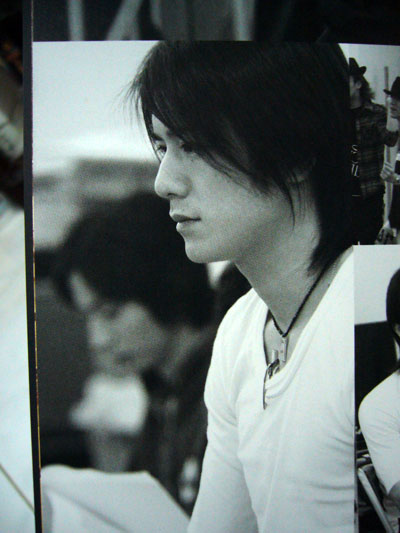 Poster (800yen)
Only 1 type this year *phew*, and it’s Takki’s solo! We were kinda worried that it’ll be a group shot, but were relieved when we got to the counter upstairs~ that the clearfile & poster are all Takki solos *~yay~* 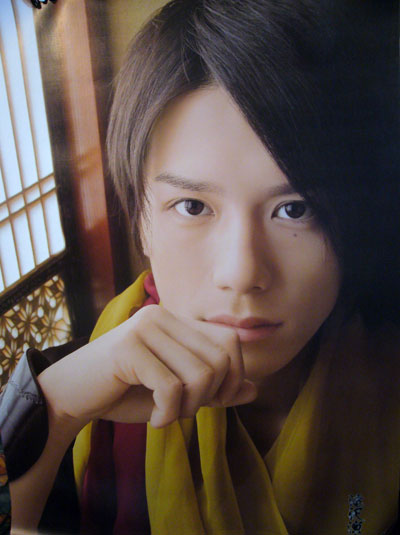 Clear File (500yen)
Probably my favourite goods this time? He looks GORGEOUS in this picture. I’m so glad they chose the right image for the clear file! It was so nice that I had to get 2 for myself… one to use one to keep LOL 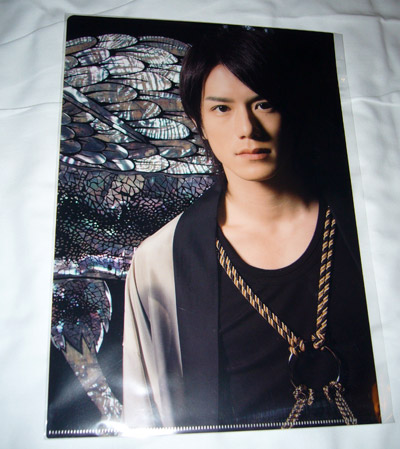 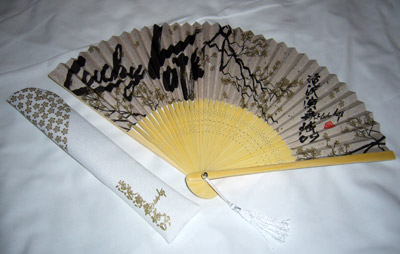 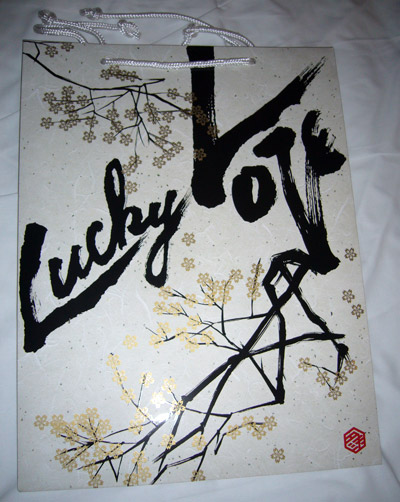 Original Photosets (600yen each)
There are 3 Takki photosets, and 1 each of Kitayama, Fujigaya, Kawai, Tottsu, and 4 other Jrs (from M.A.D. & They Budou). And there are 4 photos in a set. In each Takki photoset, there is at least one photo of Tono in samurai outfit!!! KYAA~ XD 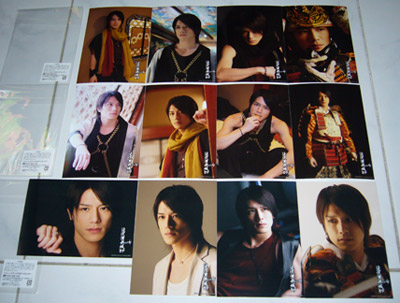 Photo Album (1,000yen)
This went on sale only from 2nd April onwards. I was paying for the stage photos when I saw the photo album behind the counter, and I just told the girl to give me 2 of that LOL. As usual, there are 20 slots in each album. 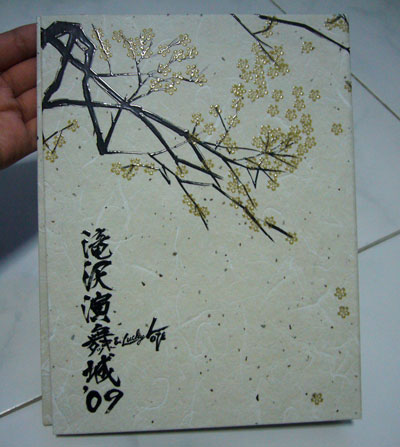 Stage Photos (500yen each)
The first batch went on sale on 2nd April. As I mentioned before, we were rushing for the show so we didn’t notice there were stage photos on sale… not until intermission time lol. Immediately, I zenbu-ed all of Takki’s (out of 20 stage photos, Takki’s are #1~12). The pics with new costumes are #2, 3, 6 and 12. And our ichiban favourite is #2, chou kakkoii drum-hitting Tono!! XDDDD 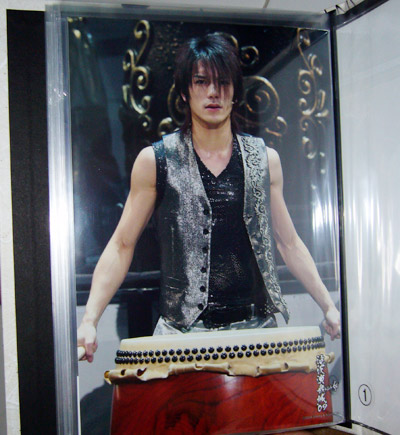 Just this first batch of photos and I’m already $100 poorer *tsk tsk* It’s getting harder and harder to have self-control on Tono’s goodies. I can hardly stop myself from zenbu-ing. I tried… I tried… But Kat just had to look at me, and I was like… “Okay, ZENBU!” LOL… Last yr, I still had a tiny bit of restraint. This year, it has gone down the drain LOL

Now for the food! =P

Takikomigohan Zen (3,500yen)
We had Bento (Box) seats for the opening birthday show ^^ and so it comes with the Takikomigohan meal! I had it for the first time! XDD Ureshii desu yo ne~ During intermission, we just had to take the box from the shelf behind us, dismantle it, and start eating. I took a few photos of it. I think the security staff didn’t mind since I was not aiming at the stage. 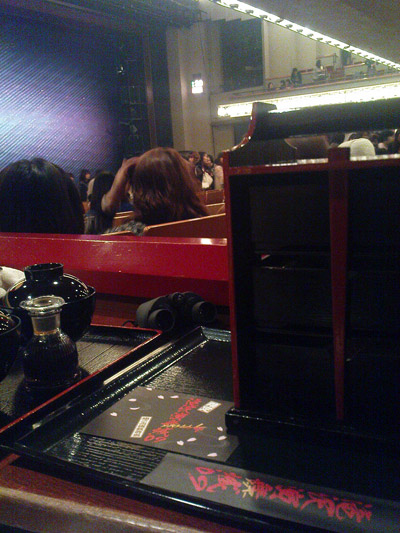 Anyway, we couldn’t finish the meal at all! Intermission is too short a time to finish everything! But I did try everything~ and the soup was really oishii! The fish in it was nice!! I loved the “Katsuo no Tatakki” sashimi too~~ XDD 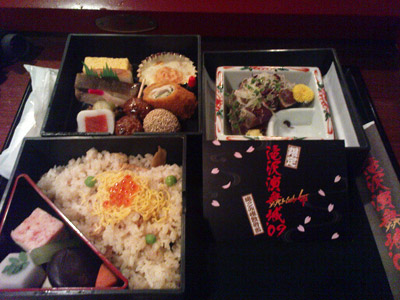 We didn’t buy the Takikomigohan Bento (takeaway) sets (1,500yen) since we already had the meal itself. Now I kinda regret not trying the Western Bento “Kani gratin”. It looks so oishii from the WS clip~ v__v; Maybe I’ll try it next year. I hope they still have it! This year, I didn’t try the Sakura Monaka Ice too, since I already tried it last yr. And coz I wasn’t feeling well, I couldn’t eat ice-cream u_u; Kat had it though… It’s something nice to cool yourself down (from all the hotness) but nothing fantastic. I guess it’s the Sakura season that’s why they still had this, but I’d prefer the Mango shaved ice from 2007’s XD

Kani Seafood Salad Soba (1,300yen)
Oishii~~~~ XDDD 2nd year in a row that I had this! And this year, we ate it…. TWICE!! Yea, expensive, but it’s really delicious ne!! The kani was so gooooood!! And I love goma (sesame) dressing! Both times, we had it during intermission at the 2nd floor Kabesu cafe. Had to make a reservation before the show first, and we used up our “10% discount” coupons on this! 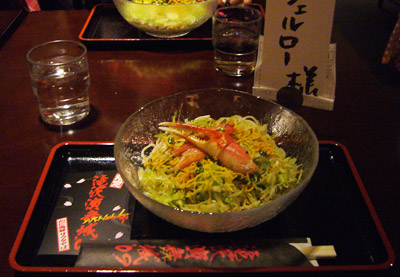 Now for the rest – the theatre, posters, flowers, our seats, etc….

Posters & Shimbashi Theatre
At Higashiginza station, there was a poster of Enbujo’09. We missed it the first day coz we were looking the other side. Although it’s only the normal poster (which we see everywhere!), it still made us happy to be able to see one~ :D 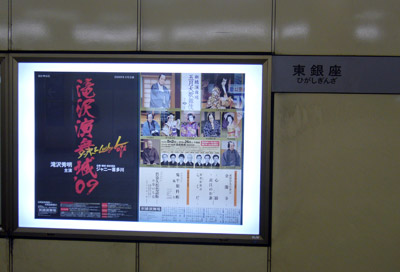 From the train station to the theatre… Here’s a picture of the theatre, blocked by some trees. This year, we came to Japan when the Sakuras are blooming. It’s really a wonderful season to be in Japan, and really the best season for Enbujo ne. 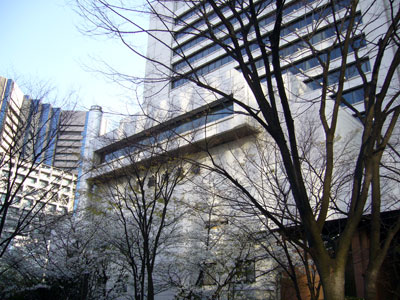 There’re 3 posters outside the theatre, one of them had the show schedule on it, while the other two are just the normal poster with the Enbujo title. 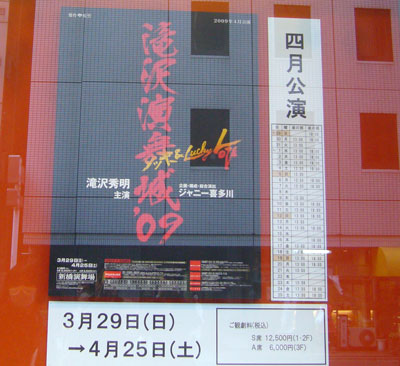 Inside the theatre, there’s another poster at the doorway. 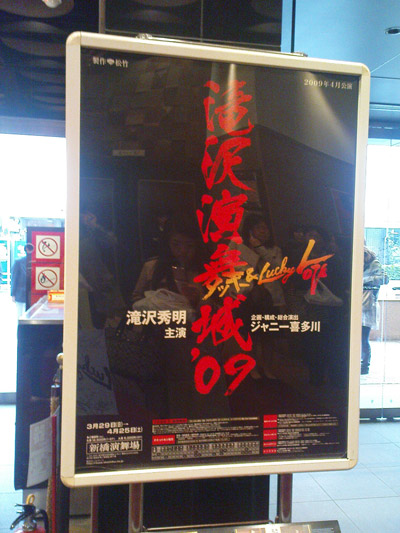 Among those was a photo of Takki with the flowers. This year, he’s wearing the Shanao/Ushiwaka costume instead of last year’s modern clothes. And below it is a thank you message from Takki. 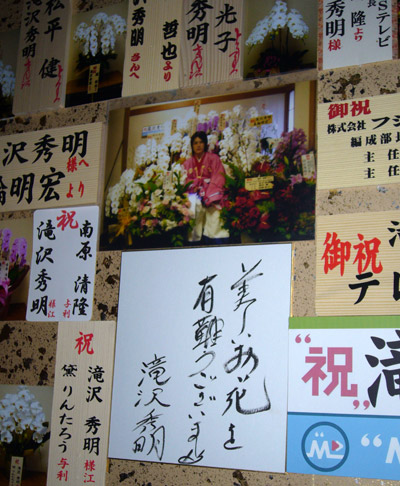 The lighting wasn’t very good, so my photos didn’t really come out well. After our last show, I took a picture of the theatre after the lights went out. And you can see the small room from here, it’s on the left.. 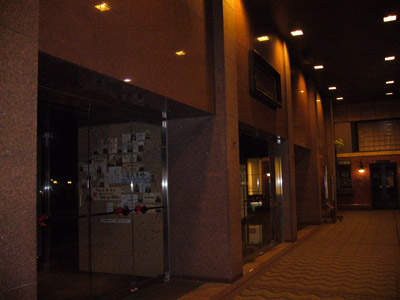 Pre-order & CDs/DVDs section
Also on 1st April, there was a picture of Takki on the walls of the first floor, possibly from the “Sha La La / Mugen no Hane” single photoshoot. If you pre-order any of the 3 versions of the single at the theatre, you’ll receive a free clear file each (different design for different jackets). The pre-order booth is located beside the Bento counter on the first floor, instead of in front of the central entrance of the theatre. I sneaked a photo of it at the end of the show, when almost everyone has left the theatre lol… 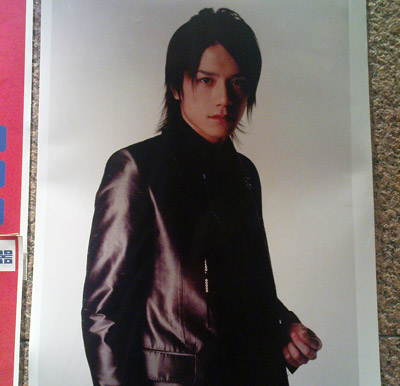 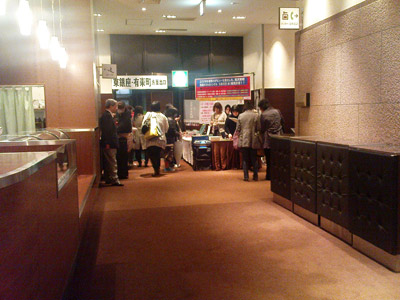 Our seats this year:
First time ever I attended so many shows for one butai lol. Usually I only go for 3 shows, but this year, as you can tell, I’ve gone mad. My obsession for Tono is getting from bad to worse. I’m beyond cure LOL

* The seat for my last show was just beside the hanamichi! It was so close that I could just rest my elbow on it ne. I sneaked a photo of the hanamichi & stage during intermission. Imagine Tono walking along it, and the crying scene happening just in front… THAT was how close I was ne!! 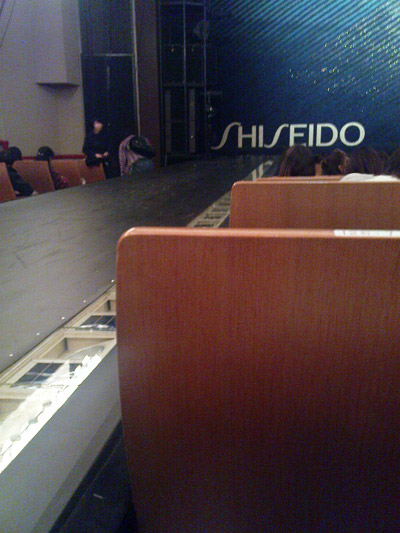 Etc…:
I bought a Hello Kitty “Sagi Musume” keitai strap from the souvenir shop on the first floor during intermission. A lady was telling her 6 yr old (?) daughter that “Takki was performing this just now” :) I found it really sweet that mother and daughter went to watch Takki together… They ended up buying not only the keitai strap, but the writing pad as well :)

Anyway, this is my keitai strap… Kawaii desho XDD 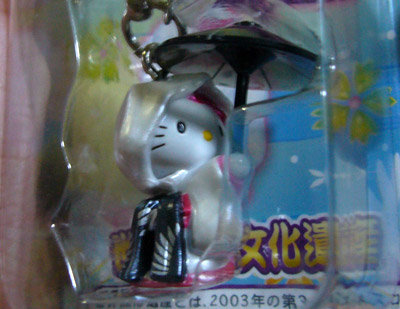 I already had the “Yoshitsune”, “Benkei”, and “Shizuka” Hello Kitty keitai straps from my trip to Kamakura/Koshigoe last yr (during Enbujo’08). Now, I have “Sagi Musume” added to the collection!! Yay~!!

Too bad they didn’t have “Yagura no Oshichi”…