It’s been a while since I’ve written a report on the shows I attended. Over the past two years, I’ve just been sharing bits and pieces of my Enbujo/Kabuki trips on Facebook instead. Just realised that the last report posted here was for Hachioji solo con in 2012 lol. Okay, here I go. Please bear with me cos I’ve gotten a bit rusty XD

As there were many people taking pictures of the poster, the show goers do not usually walk in front of it so as not to block their views. Very considerate :) 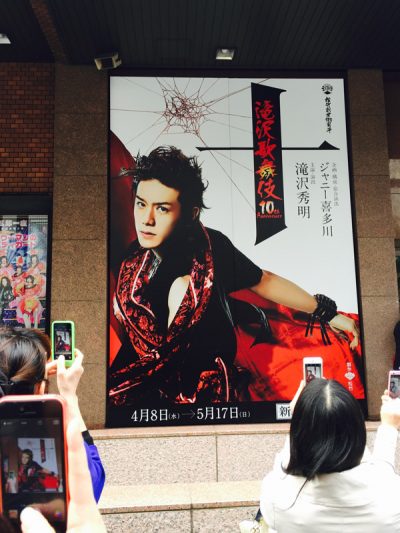 Speaking of the poster, let me digress a little. While I was in Tokyo, I saw the poster many times, at train platforms and inside of the train stations. There were also some hanging from the buildings, like the one in Shibuya. Seems like quite a lot of advertising money was spent for this year’s shows :)

At Higashi-ginza station, this was at the platform. 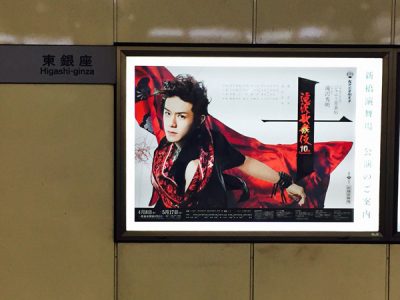 And I think this was near the Kabuki-za exit inside the station.

As for this one near the jimusho, I actually went to find it, it wasn’t by chance haha. 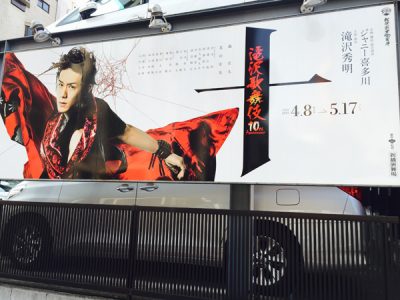 This one was inside the theatre, saw it when we came out from the ladies lol. Even though we were rushing for the show, both of us took out our phones to snap this lol. Btw, this was taken on 23 April, 20th anniversary of the day Takki joined Johnnys Jimusho. It had the “all seats sold out” sign on it. 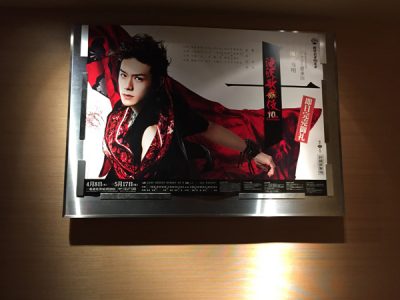 Alright, back to the venue.

The entrance of Shimbashi theatre was decorated for the 10th Anniversary with lanterns and sakura. Somehow it’s difficult to take a nice photo of it. 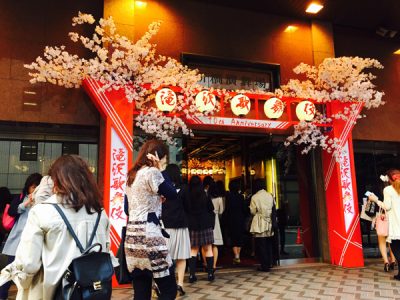 Inside the theatre, the information counter area, and entrance to the level 1 seats are decorated similar to last year’s, just with more sakuras this time.

There were many food selling inside the theatre, but the first three on the list are kinda more limited to Takizawa Kabuki, as they come with Takizawa Kabuki memorial cards with the date printed on it.

I had the kaisen salad udon during intermission of my first show. Four of us met up at our table and were commenting on the English of one of the segments (I’ll talk more about it there, if I get down to writing a report of the show lol). As usual, I love the taste of this (it’s goma sauce after all, how wrong can it go!), but to be honest, I prefer the soba to udon. Next year, I’ll definitely choose soba again!

As for the goods…

I’ve posted a preview previously so I’ll not go too into details here. The mini tote bag is REALLY mini! I was kinda shocked when I saw it for the first time. I mean, I’ve seen pictures of it, but it doesn’t look that tiny on photos. I placed two pamphlets into the bag, and it was full lol. Very cute bag though, and good to use as a lunch bag!

Over the years there were so many sensu goods ne, and this year’s is pretty as well, but I still love Enbujo 2007’s and Enbujo 2008’s best! 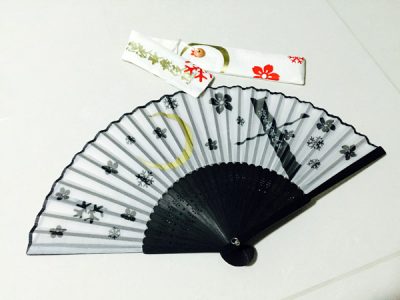 I collected all the tenugui over the years. They would look really nice when spread out, but I’ve never opened any of them, as I’m not sure how to fold them back… tsk. If I had a little bit more sewing sense, I’d make them all into nice clothes for my Duffy and Shellie May, like this one I posted on Facebook lol.

The chopsticks were placed in this crocodile-skin-like cover haha. I love the chopsticks themselves, the design at the top, but not much the cover. For cover, my favouite would be 2010’s (which has the classic “H” and “T” design…)

Oh, one last thing before I finish up this post. This isn’t on the goods list, but it was one of the ‘rubbish’ that I picked up from the floor after Act 1 hahaha~ Yup, the gold coins from Nezumi Kozo. Arigatou ne, Nezumi-sama :)

以上です! I’m not sure if I’ve the time to write a report of the show itself as I’ve a string of events coming up in June, and I only watched 2 shows this time so memory is kinda vague lol, but I’ll try :)