I tried not to post this review too early, as someone haven’t gotten her discs yet. But now that she has, here’s my thoughts on the single, while it’s still fresh hehe~ Actually, now I know why ppl often say I look as though I lack blood, or have no colour in my skin… It’s all Tono’s fault!

*Possible nosebleed* if you read on. Spoilers too, of course!

First thing I did when I reached home on Monday was to take another picture of the package with the CDs and posters. And yup, I took a taxi back :D 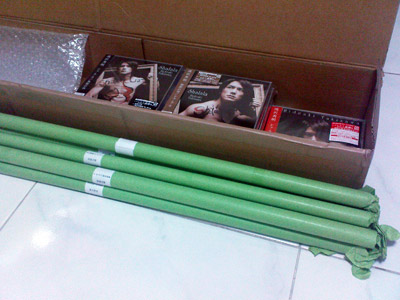 And the first disc I opened was Jacket A. I usually open them in order :)

Because the disc on the left had fallen off its teeth and went over to the other side, what greeted me when I opened the cover was a NAKED BODY in a frame! Wahahahaha~~ as if I hadn’t seen enough SKIN on the outside!! And when I flipped everything over and took out the disc from the right side, KYAAA~~~ MORE NAKEDNESS!!! BICEPS!!! CHUNKY TONO!!!!!!!!!!! 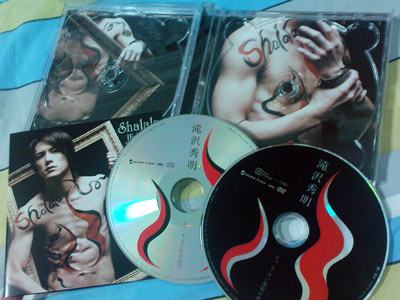 His nipple is right where the teeth are! Whenever I take out or put the disc back, it feels like I’m pressing it wahahahaha~~~ *runs*

JACKET B (MUGEN NO HANE VERSION) 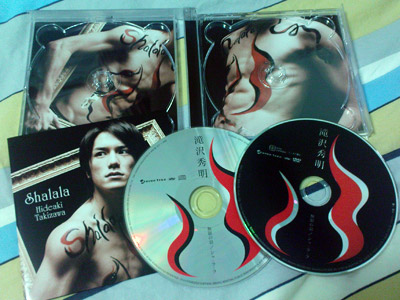 He looks much more “chunkier” in the inside pics than on the covers. 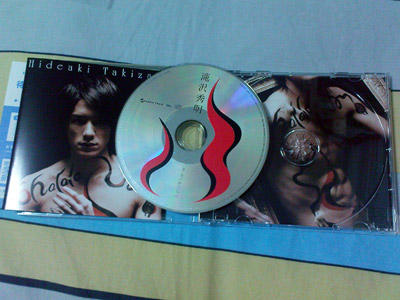 After looking at the real covers (instead of online images), I think this is my favourite cover of the three jackets!! ♥ Actually, the back image of Jacket C is also my favourite of the 3 back images!!

ALL AT A GLANCE! 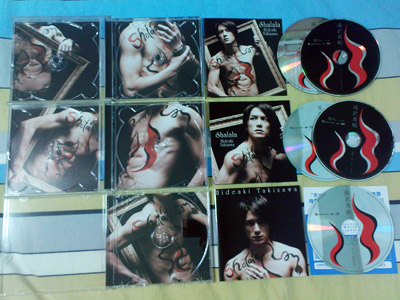 I really love the bracelet he’s wearing~~ so cool, and it matches his belt!!! You can see that especially from the back cover of Jacket C. And the NAIL PAINTING on his pinky looks cool!! Surprisingly, it’s not girlish at all. Instead, it looks really artistic~~ Once again, Takki’s single has my favourite colour combi — RED, BLACK & WHITE!! kyaaaaa~~~~ Enbujo colours desu yo! Daisuki!! ♥

I think the posters that come free with Jackets A & B are larger in size than the usual ones (Enbujo DVD, Takitsuba Best DVD, 2U4U album, etc). That explains why the package was so long. But I really thank CDJapan for doing it so well~ their packaging is really ichiban! XDD And know what? I haven’t opened my posters yet haha (coz I’m still at my bf’s house~), but I found these images from Y!A Japan. They are different from the CD covers yo! Can’t wait to get back and put them on my wall!!! 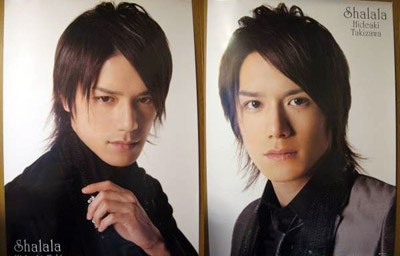 Now onto the important part of the single…

I’ll start off with the songs. Sorry, this doesn’t include “Tegami” which Takki wrote, as I haven’t received my Jacket D yet…

Shalala シャ・ラ・ラ
I love this song so much after watching the performance at Enbujo’09! I love how when ALL of them did the chorus together (Takki, Jrs, female dancers, everyone~), they seem to ROCK the entire theatre! I haven’t seen a good duplicate of that kind of effect yet on any of the shows so far (Shounen Club & Music Jump)… But I remember that the melody kept playing endlessly in my head the entire night. It’s the kind of song that just keeps playing non-stop over and over again~ really catchy tune! This is a T&T-rashi song, something really similar to “Ho!Summer” and “Venus”, especially the trumpets ending. After all, I think this song is arranged by the same guy.

Mugen no Hane 無限の羽
I LOVE THIS SONG!!!!!!! ♥ ♥ ♥ It’s probably my favourite Takki song now~ on par with WITH LOVE! XD It was really LOVE AT FIRST LISTEN+SIGHT on March 29, 2009, at Shimbashi Enbujo :D although it’s not the kind that would get stuck in your head. I remember returning to the hotel room the first night I heard it knowing that I prefer Mugen no Hane to Shalala, yet I couldn’t remember its tune LOL! No words can describe how kakkoii the dance was during Enbujo’09!!! Especially that music bridge part where they form a 5-ppl column and do the alternate hand-wave thingie, followed by the hats throwing+catching in a V-shape formation… The melody is sooooo nice, and the lyrics is sooooo beautiful~~ Both are written by Takki, which makes it even more SUGOI!!! This is the kind of song I’d love Takki to write more often. Sometimes I can’t help but feel… If only this was the main song for this single…

YOU Yacchainayo!! YOUやっちゃいなよ！！
This is really funny and weird LOL… I just heard it once so far, and seriously, I can’t remember how it sounds like already wahahahahaha!!! I just remember a Johnny-san-like voice and loads of “YOU!”s LOLLL…

And definitely, I love Mugen no Hane karaoke, especially the beginning part, and during the “zutto sagashiteta, boku no kokoro ni hikaru boshi”…. 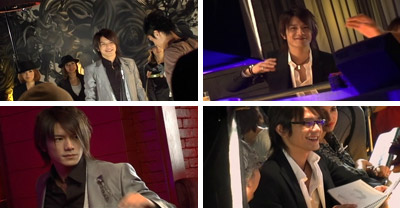 Shalala PV
Although I’ve seen it before, viewing it on clear DVD quality made a difference. I love this PV more than “Ai Kakumei” (I had a problem with his hair in that one~). His visuals are better in this one, especially when Takki is singing at the bar counter, and during the solo dance. And the colours are really cool. It’s something I would wanna show my family and friends.

Offshots
KYAAAAAAAAAA!!!!!!!!!!!!! ♥ ♥ ♥ God knows how much I was flailing during this clip! So much kawaii-ness and kakkoii-ness, Takki!!!! But I wish they showed more!!!! Takki should really appear on TV on a regular basis! It’s such a waste to keep that beautiful face and bright personality away from viewers… NE!!! (Btw, I think I’ve seen that director somewhere before…)

Mugen no Hane PV
KYAAAAAAAAA!! A Takki-only version of “Mugen no Hane”!!! There are no Jrs’ voices in this one, and it’s a very relaxed video — loads of monotone or duotone, which I LOVE!!! Takki recording the song in the studio, preparing for the recording, etc… I love the colour of the PV, very nice and calm… And there are animated cuties in it LOL~ I love those kind of drawings! The only thing I found ‘cheesy’ was how Takki finally saw the male one and picked him up~ but… but… it was soooo cute when the female one was standing by the door! I actually let out a short “KYAA!” when I saw that hehe~~

That’s about it~ Gomen ne for all the excessive KYAAAAAA-ings m(_ _)m…. It turned out to be more of a flailing post than a review, but I don’t think you can blame me =P