I’ve been so overwhelmed with work… to the point that I thought I might just collapse in office lol. But fortunately, the weekend is here! After posting this, I’ll be off to bed hehe :)

On 9/22, I called DHL to reschedule delivery in the evening and the time slot they gave me was 7-10pm. If the guy had come at 10pm, I think I wouldn’t sleep that night. Fortunately he arrived at about 8.30pm, and I immediately started my Takizawa Kabuki DVD marathon :D 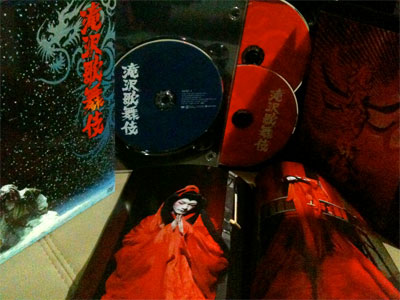 I really love that scene where Oshichi puts her hands together. 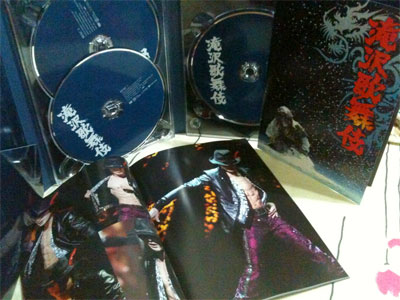 KYAAAAAAA!! The booklet!! I was expecting to see photos taken from the official stage photos, like for Takizawa Kakumei DVD, but no, this booklet is a gem! The pictures were brilliantly selected! Loads of hadaka Tono during Revenger, Taiko drums, make up scene, etc. Whoever did the selection of pictures — good job!! ^.^

The booklet was packed outside the DVD, and although the paper quality isn’t fantastic (the cover curls up if you leave it alone on the table, but it’s not a problem coz it can be straighten by putting weight on top), the pictures more than makes up for it haha~ For someone like me who bought ALL the official stage photos at Nissay, I really appreciate this! :)

I.LOVE.THE.COVER. And actually on the discs themselves, there are dragon-like markings similar to the design on the cover (behind the words “Takizawa Kabuki”), but it’s not that clear from the pic. Sorry I took these pics using my iphone, so the quality isn’t good. 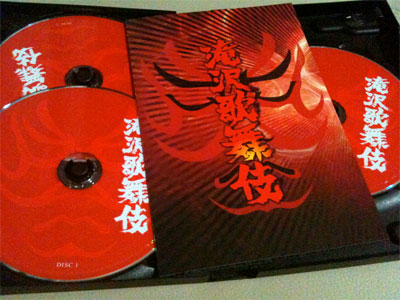 The box is thicker than I expected. It’s double the thickness of the usual DVD box – maybe cos it’s a 3-discs box (compared to Kakumei DVD). There are also markings on the discs similar to the pattern on the cover. No booklet in this edition, which is cheaper than the limited one, BUT…

I absolutely LOVE the bonus content of this edition — more than the Limited Edition’s. That’s also why I think it’s impossible for me to give up any of the editions. There’s NO WAY I can give any of them up!

Anyway, here are my very random thoughts as I was watching the discs. Discs 1 & 2 are the same for each edition, and I had posted my reports on the show itself half a year ago, so I won’t really go into my thoughts on the general storyline. 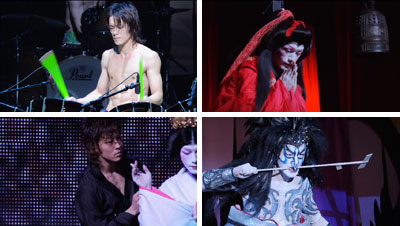 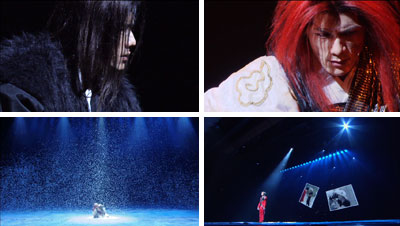 Just so you know, this special bonus isn’t only on the Children’s Day show itself, but also include rehearsals and backstage footage! These are my random thoughts as I watched. 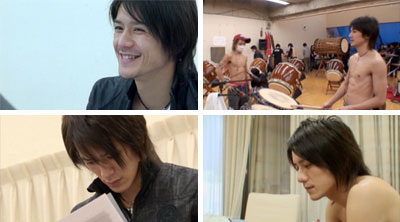 More random thoughts as I watched hehe. This might be exceptionally long, because there’s too much to kyaa about. There isn’t enough space haha~

I’ve been watching this DVD every single day, ever since I’ve received them on 9/22 lol. And it doesn’t take a genius to figure out that my favourite disc is the Documentary (Disc 3 of the Regular Edition), followed closely by Disc 1 (of both Editions).

One thing for sure, these are my most precious DVDs, even overtaking my precious Takizawa Enbujo’08 DVD! Well, it can’t be helped since the butai itself is a power-up version of Enbujo :)

3-discs, a 90mins behind-the-scenes documentary, and an excellent Act 1. These have become the characteristics of a Takizawa Enbujo/Kabuki DVD, something we don’t find in Takki’s other butai DVDs (Kakumei, Dream Boy, or the very first Enbujo DVD). If I were to recommend just one of Takki’s DVDs to an ippan (non-fan), I’d definitely go with this.