I read uuu’s chinese translation of Top Stage and decided to translate it into English. Apart from the typo error (Takizawa Hiseaki… LOL~), I really love this mag!! Pics – check. Article – check. Since it’s doubly-translated, it might not be very accurate, but the essense should hopefully still be there… 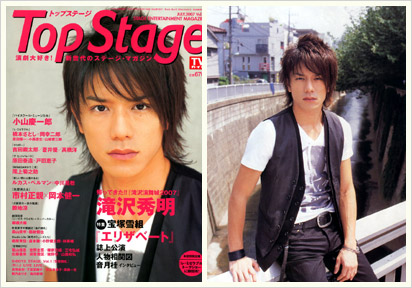 Want to create a regular stage production
Last year, he touched the hearts of the audience with a compelling performance on stage. This summer, Takizawa Hideaki will once again stage “Takizawa Enbujou”. This time it will be more complete and scaled up. We asked Takizawa, who has started preparations for it, how he is feeling now. 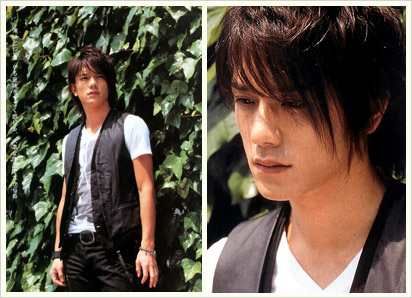 Carrying off from last year, I’m grateful to everyone for their support. This year, “Takizawa Enbujou” will also be staged at Shimbashi Enbujou. We have gone through a lot of discussion, and by the time you read this article, rehearsals should be underway.

Now I’m discussing with the staff on what our standpoint should be. If we can say it in a phrase, it should be “[Takizawa Enbujou] is back!” Like this. It will not be exactly the same as the previous one, but will also not be totally different. We will try to overcome the problems that we encountered last time and improve on them, to present a more complete piece of work. It should be something like this.

There were suggestions to create an entirely new piece of work but I personally feel that if that is the case, we shouldn’t be using the name “Takizawa Enbujou”. If it is a new piece of work, and if we still continue using this name, then it will lose its meaning. As long as “Takizawa Enbujou” is around, I will preserve whatever that needs to be preserved from the work that was created from scratch last year. But on top of that, I also hope that there will be elements of surprise and freshness for the audience. Rather than thinking of new ideas, I am more focussed on creating a stage that can only be seen in “Takizawa Enbujou”. I hope that it will become a regular piece of work.

More in detail. The 1st segment. Legendary stories in the history of Japan are usually presented in the form of Kabukis. This doesn’t change much, for eg. “Byakkotai” or “Taki no Shiraito” etc. Because content is rather similar, the focus will be on the way it is presented. There are also suggestions to increase the Kabuki presentation. Should we keep the old? Create new ones? There were differing opinions during our discussions. The final decision is, if we want to produce a Takizawa Kabuki, then we don’t have to adhere rigidly to any particular style. What will the final outcome be like? Although I’m not sure yet, the aim is to create a unique piece of work. Compared to the previous one, there might be a decrease in the number of scenes, but there will be scenes which will be more in detail and richer in performance. Specifically the Kurama scene at the end of the first segment – the battle in the rain. I want to strengthen this scene. We started our discussion with what should we do to strengthen this part. To power up the rain battle scene, the flying has to be “byun byun”. Crossdressing too, to power up, the esthetiques when entering the stage… I am lying actually (laughs)

The 2nd segment is “Yoshitsune”. Although it was announced that it will be a monologue, actually it is not entirely a solo performance. There will also be other supporting cast taking part. The importance is not in the number of performers. The main theme is different. In the previous one, it was the bond with mother and sister. It was about family love. This time the focus is on the relationship with older brother – Yoritomo. The emotional change Yoshitsune went through will also touch on family bond. It’s a men’s world.

I am aware of the media’s announcement that it will be a monologue (laughs). How shall I say this? Although I can’t say much now, during our discussions, there wasn’t any mention of a monologue. The day when the announcement was made, the staff and I were shocked as during our dicussions, our impression was that there will be a lot of people, quite different from a monologue. It isn’t solely a one-person show and me talking all the way. But for now, we have arranged for Yoritomo to be also played by me.

Therefore, I will have to appear alot in the 2nd segment (laughs). Now, I heard that I will not have to leave the stage. No matter how I think of it, I think it’s not possible (laughs) Yoshitsune is on the stage and there are different elements that will be added to the plot. This kind of monologue, compared to last time, Yoshitsune’s thoughts and feelings will be brought out more. The 2nd segment will undergo the most changes.

The 3rd segment is Show Time. Show Time is not only an extra. If possible, I want to add more significance and meaning to it. Now I am thinking about it… The 2nd segment last year was during Yoshitsune’s death. The theme of “Death” is a little dark. So this time, we will present this in a more positive way. Yoshitsune’s death will be portrayed in a brave light. The end of the 1st segment is when Ushiwaka enters the stage. The 2nd segment will show his growth to his death. The 3rd segment links to the Takizawa Hideaki now. The theme is Rebirth. On the way to rebirth, I will also sing “Venus”. I’m really sorry about that (laughs)

All in all, this will be a carefully planned piece of work. I am working hard now. There are still alot of unfinished work for “Takizawa Enbujou”. To me, just by being able to perform it evokes a lot of feelings in me. It is a very important piece of work to me.

There you go~ it’s loosely translated from the chinese translation, and you know how some stuff can be lost in translation ne~~ In any case, I’ll be back with more Enbujou~~ (Hikaru-kun mo ♥)!