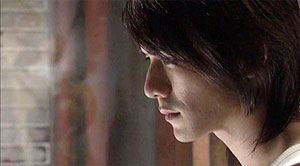 OMG!!!!!! Liar liar, pants on fire!!! When he looked at his hand, I knew he was going to do that! And right after he did it, I received an SMS from Irene! Then straight after the show, I checked Facebook and saw Azuki’s message on 嘘つき-san! hehehe…

He only lied to protect himself rite, but yappari, he’s a smart person ne! hehe~ And he probably left his wounds as they are too, so that the pain can remind him that he’s alive… like he told Chiharu in the prison. Anyway, here are some reasons why I love this episode so much, more than the other eps so far…

Ryuzaki… kawaisou… after 18 yrs, finally able to meet his dad, but his dad wanted to die with him. Yet that’s the most ‘fatherly’ thing that he’s ever done. Sad case… Ryuzaki said that if the two brothers were together back then, things might have been different. Like what his grandfather said, that perhaps it’s only when it’s the 2 of them together – holding both the power to ‘heal’ and to ‘kill’ – that it’s truly “God’s hand”.

And that Sawamura is so irritating, really feel like slapping him! But his last words of the epi are soooo scary… “Know what happened to the Orthros dog in the end? It died… killed by Hercules.” So, Hercules = Sawamura, and he’ll kill them both next week? I hope Kumakiri is thinking of something clever, I don’t want them to die! >.<

Somehow this 75mins seemed to pass so fast… and before I knew it, it was the end…. Right after it ended, I was feeling… so sad… coz it means there’s only 1 more episode of Wan Wan left… Too short!!!!!! Sigh…