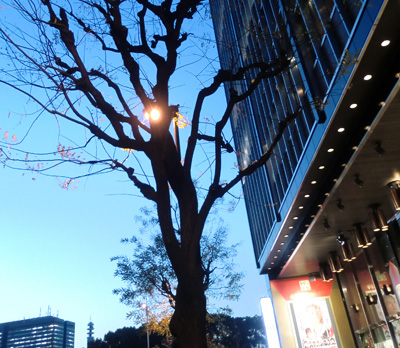 This is the poster outside the theatre entrance. While we were trying to take pics of ourselves in front of it one night, some salarymen walked past and one ojisan said “Takki! Takki!” and pointed to himself lol. We had a good laugh. 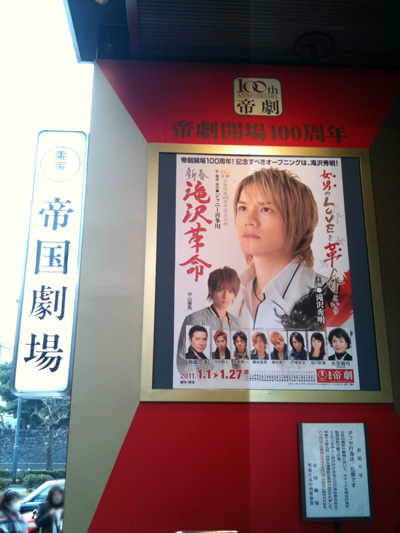 And a 100th anniversary banner thing above the sign board saying that the show today is a full house. The total duration of the show is 2hr 35mins, with a 25mins intermission between two acts. I think the evening shows end 10 mins later? But I might be wrong lol~ 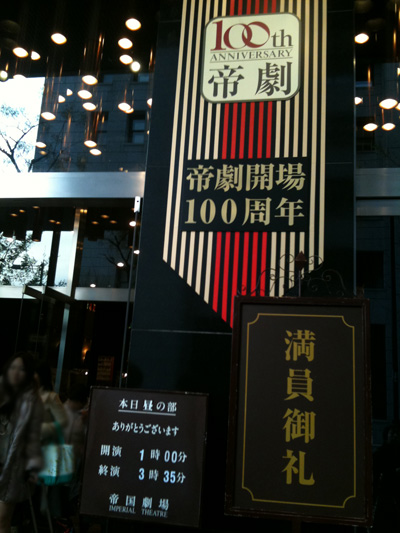 After we entered the theatre, there was a huge arch of flowers, as well as posters and photos of Kakumei, Dream Boys, SHOCK, etc. The arch had the words “Imperial Theatre 100th Anniversary” on a gold plate, but due to the strong spotlight, I wasn’t able to take a good shot… 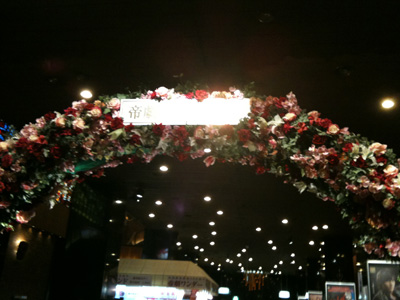 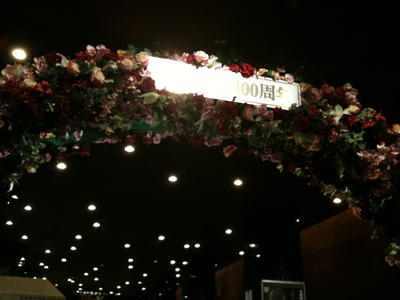 This is what I took from the back, the arch is high above the people. 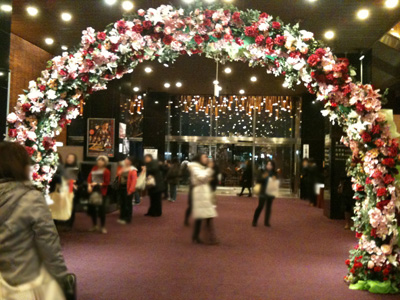 And this is the Johnnys Trilogy: SHOCK, Dream Boys and Takizawa Kakumei. Of course, Takki was the original Dream Boy back in 2004 :) At least he owned two out of the three, even if he might have passed it or will pass it on to his kouhais later. 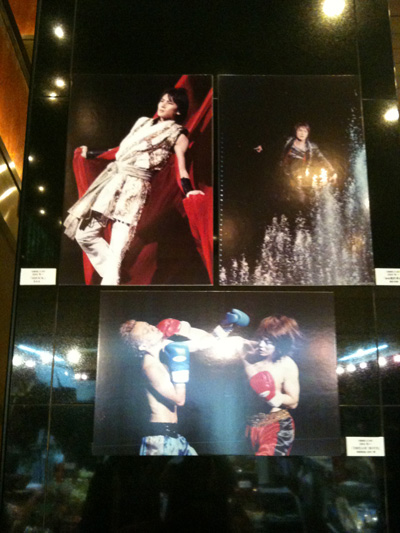 I didn’t take much pictures inside the venue… I either didn’t notice the congratulatory flowers, or I did but didn’t/forgot to take any photos of it. Erm, I’m getting old. I can’t remember lol~

In any case, I remember I was mostly rushing here and there, running between both floors (between the goods area and the lockers downstairs), buying goods (had to split them into 3 days, and for the first day itself, I was running around like a headless chicken… to and from the goods counter 3 times amidst stares… Everyone must be thinking I’m crazy~ >.<) Thanks, O-san, for helping me. I definitely couldn't have managed it myself. Moreover, my digicam was kept with the staff until the end of the shows so I was using my lousy phone camera (erm, even though my digicam quality isn't that good either lol~) Anyway, onto the goods. Pamphlet (2,000yen)

I really love Takki’s image in the pamphlet~ really kakkoii! And a fellow Singaporean being the photographer of this just makes it better :)

This is the cover. 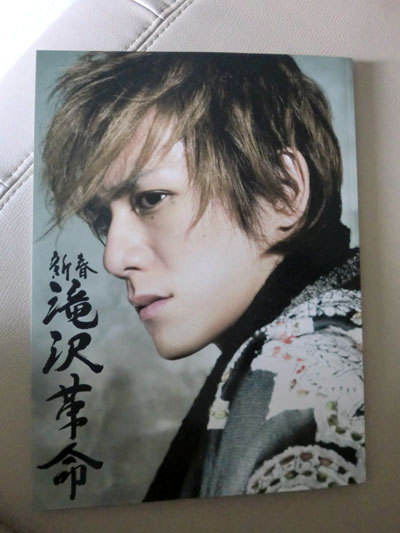 And some of the inner pages.

I love the way his hair was styled. 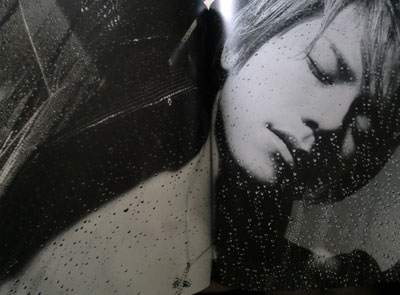 And that double-zip black jacket is soooo cool!! 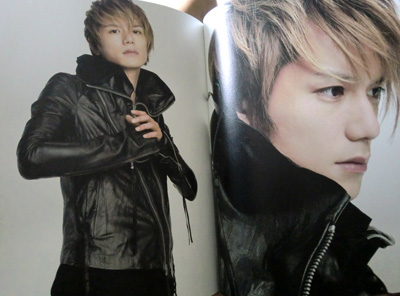 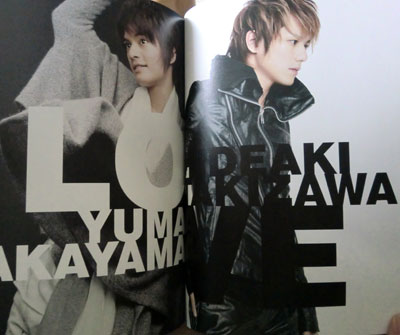 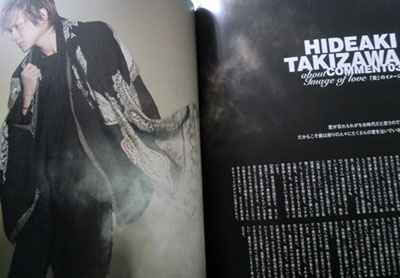 It was really hard to take a good pic of the clearfile coz of the reflection… and this is the best I could get. But it’s a really cool pic chosen for the file. 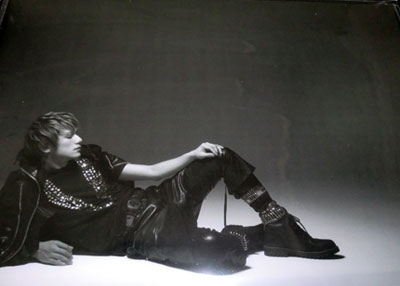 This is larger than I thought. But it’s good as a 照妖镜 in office LOL, as apart from being a hand held mirror, it can be folded and put to stand on the table. The box is nice :) 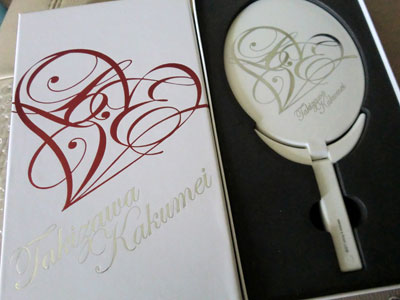 I bought two of this haha~ And I’ve been using the first one since, and plan to use the second one as well. It’s really cute, handy, and I have it hung on my bag so that I’ll remember to use it on the go (my lips are always too cracked~) 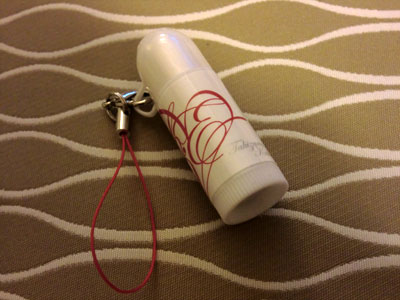 It’s hard to show how this really is. It comes as a heart shaped pouch. Then you unzip the pouch and turn it inside out to reveal the entire bag. The heart shape is then attached on the back of the bag, and acts as a small pouch :) 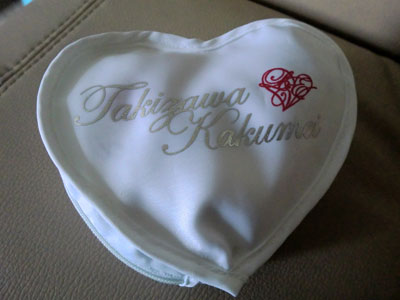 The front of the bag has the “L O V E” logo in silver. 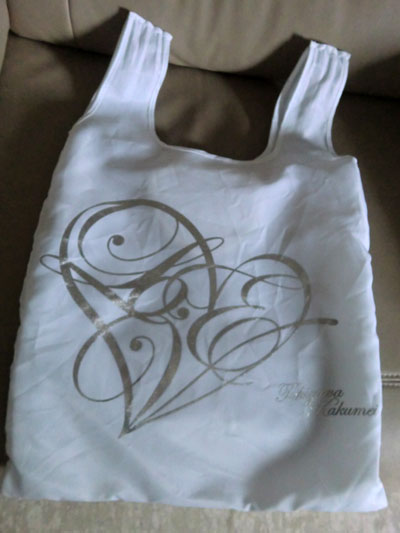 The poster is so kakkoii~ but it’s hard to get a good shot of it. This was taken in our hotel room, with the help of O-san. Thank you! ^^ 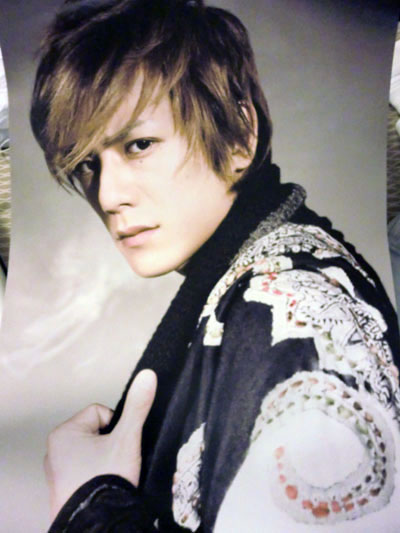 Original photosets (600yen each, 4 photos in a set)

Here, in order, A is the top, B the middle and C the bottom row. 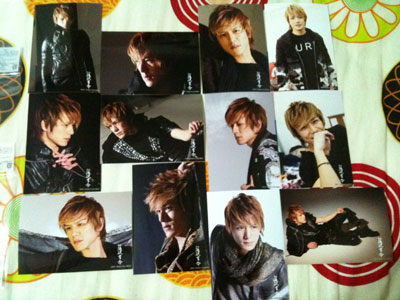 Didn’t know how to take a pic of this, so I’ve draped it around my piano chair haha~ O-san bought one for using it as a shawl in office. I think it’s quite handy for the winter season. Of course, it’s printed with the “L O V E” logo with the English words “Takizawa Kakumei” at the bottom right. 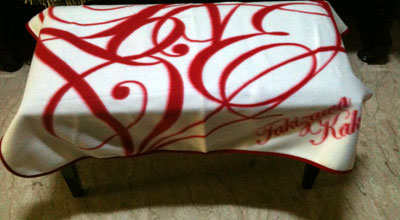 When I was there, the second batch of photos were just released. And even though it’s like 8 bucks for one piece of paper, I bought… many! *bitter laughter*

Here are my favourites from the first two batches. 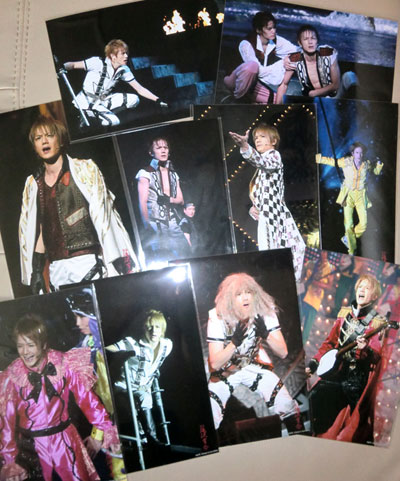 The top left is O-san’s favourite. Perhaps mine too~ I really love what he was wearing – my favourite of the show this year! And the top right pic means alot to me… Of course, I love that bottom right pic when Takki played the shamisen! I don’t know what other words to use, but it’s really “kakkoii” when he played and sang at the same time!

Pretty~ and black based :) I don’t know what material it is, but it’s damn hard to get it out of the plastic initially coz it sticks like crazy lol! But… I love the stitches along the edge of the album! And it’s like kind of a cloth material… not hardboard like the previous years’. 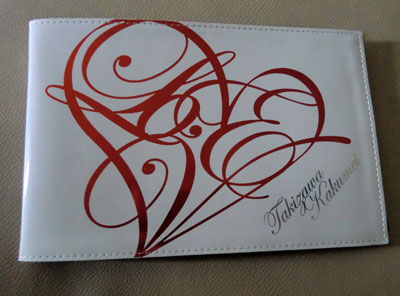 Just to end this post, here is a pic of the Takizawa Kakumei billboard that we found after walking around the station for… almost an hour? Lol~ I can’t remember exactly how long, but we were walking around aimlessly and randomly trying to find a billboard… 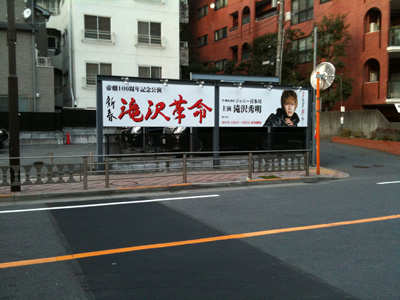