This one has been on the “Upcoming list” for a long long time. Finally it’s completed! ^o^ Hope you enjoy the clip xD Please do not re-upload/re-post this clip without permission, but do feel free to direct people over to this post. Thank you! ^^ 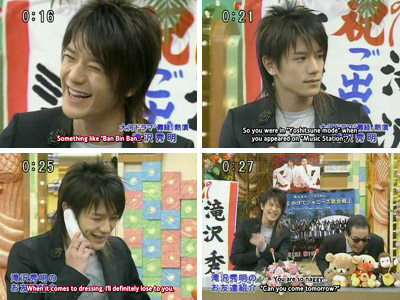 Takki received loads of flowers that day, from his Yoshitsune co-stars, Avex, various magazines, etc. There was also one from Watari Tetsuya-san, whom he’ll be co-starring with in the upcoming “Kokuchisezu” ^^;