This is by far the hardest clip to time – so many people speaking at the same time lol! I left out some of the not-so-important lines (or else the entire screen will be filled with words lol), and tried my best to hold the words long enough to be read. Hope you guys are able to follow through to the end :)

About this clip: T&T came on Waratte Iitomo on Wednesday, 4th June, and after the broadcast ended, they appeared again. This extra segment was aired on the Zoukangou Special 4 days later. They battled each other in the “Iitomo Championship” (of balloons and arrows ^^) where guests can’t usually take part. Takki seemed to be having a flu that day *v_v* but his reactions were still so cuuuute *pinch*! If you pay attention to the audio, you might catch Tono’s coughing a couple of times. 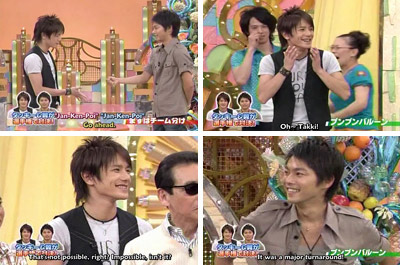 Maa~ it’s been rather quiet recently, and it might be a frustrating time for some of us, but I hope this clip will somewhat brighten up your day (or night) xD Enjoy~ ♥